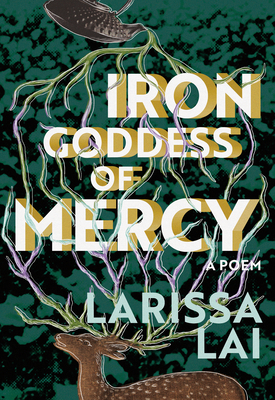 Iron Goddess of Mercyby Lambda Literary Award winner Larissa Lai (for the novel The Tiger Flu) is a long poem that captures the vengeful yet hopeful movement of the Furies mid-whirl and dance with them through the horror of the long now. Inspired by the tumultuous history of Hong Kong, from the Japanese and British occupations to the ongoing pro-democracy protests, the poem interrogates the complicated notion of identity, offering a prism through which the term "Asian" can be understood to make sense of a complex set of relations. The self crystallizes in moments of solidity, only to dissolve and whirl away again. The poet is a windsock, catching all the affect that blows at her and ballooning to fullness, only to empty again when the wind changes direction. Iron Goddess of Mercy is a game of mah jong played deep into the night, an endless gamble.

Presented in sixty-four fragments to honor the sixty-four hexagrams of the I Ching, Iron Goddess of Mercy also borrows from haibun, a traditional Japanese form of travel writing in which each diary entry closes with a haiku. The poem dizzies, turns on itself. It rants, it curses, it writes love letters, but as the Iron Goddess is ever changing, so is the object of her address: a maenad, Kool-Aid, Chiang Kai-shek, the economy, a clown, freedom of speech, a brother, a bother, a typist, a monster, a machine, Iris Chang, Hannah Arendt, the Greek warrior Achilles, or a deer caught in the headlights.

Finally, a balm to the poem's devastating passion and fury, Iron Goddess of Mercy is also a type of oolong tea, a most fragrant infusion said to have been a gift from the

Summoning the ghosts of history and politics, Iron Goddess of Mercy explores the complexities of identity through the lens of rage and empowerment.

Larissa Lai won Lambda Literary's Jim Duggins Outstanding Mid-Career Novelists' Prize in 2020. She is the author of three novels: Salt Fish Girl, When Fox Is a Thousand, and most recently, The Tiger Flu, which won a Lambda Literary Award for Lesbian Fiction, was named an Otherwise Honor Book, and was shortlisted for the City of Calgary W.O. Mitchell Award. Her previous poetry books include Automaton Biographies. She holds a Canada Research Chair in Creative Writing at the University of Calgary where she directs the Insurgent Architects' House for Creative Writing.
Loading...
or support indie stores by buying on