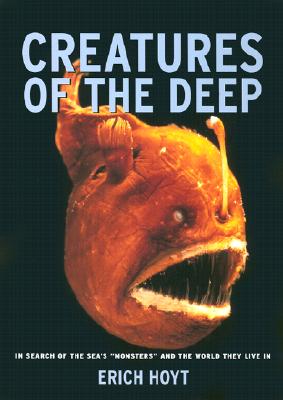 Creatures of the Deep

Award-winning nature and science writer Erich Hoyt tells the riveting story of the discovery of the deep ocean. Weaving together details from the latest scientific research about sharks, giant squid, dragonfish and the huge tube worms, clams and tiny microbes of the deep-sea vents, Hoyt embarks on a magical journey to the bottom of the sea, which is inhabited not by vicious monsters but by diverse species of pale starfish and mud-eating sea cucumbers. Roaming across the abyssal plains and descending deep-sea trenches, he presents as much about the character and charisma of these and other so-called monsters as about the extraordinary world in which they live.

The deep sea is not one place but many, and the animals living in each of these marine habitats have developed fascinating and vital ecological relationships with one another. Hoyt unravels the complex predator-prey relationships, from "killer" copepods to battles among giant squid and sperm whales, presenting compelling portraits of animals that are superbly adapted denizens of a dark high-pressure world. There are life-forms, independent of sunlight and photosynthesis, that flourish around the hot, sulfurous deep-sea vents in the magnificent rift valley of the midocean ridge, the world's longest mountain range. Surviving in conditions that appear to be close to the very soup of primordial Earth, these microbes have become the basis for the latest research into the Earth's origins. Fully illustrated with fantastic underwater imagery, Creatures of the Deep will help you enjoy and appreciate the findings and the importance of deep-sea work in the coming decades. The 21st century may well be the era of deep-ocean discovery.

Erich Hoyt has spent much of his life on, beneath or near the sea, working with whales and dolphins and marine conservation. The acclaimed author of Orca: The Whale Called Killer, Meeting the Whales, Riding With the Dolphins, The Earth Dwellers and Insect Lives, Hoyt lives in Scotland.
Loading...
or
Not Currently Available for Direct Purchase