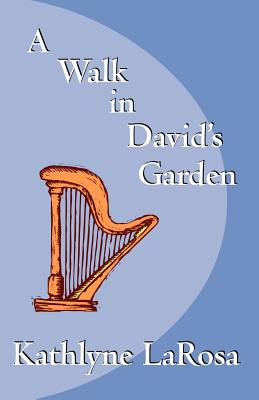 A Walk in David's Garden

A collection of psalms interpreted by the author, who found great comfort and strength in their eternal teachings.

Kathlyne LaRosa was born in 1921 in Vancouver. By chance or by fate, she was born above the British Bible Society Shop. She comes from a long line of pioneers: her roots lie in England, Germany, and South Africa, and many of her ancestors settled on Cortes Island, B.C. When Kathlyne was two months old, her South African father died, so Kathlyne and her mother moved to a logging settlement at Horne Lake, B.C. At age 12, she returned to Vancouver to complete her schooling. In 1942, Kathlyne married, and in 1944, she gave birth to her son. By 1958 she had grown disillusioned with her marriage, so she divorced and moved with her son to Stanford, Connecticut. Having previously studied floral arrangement in Vancouver, Kathlyne quickly found work managing a floral shop in Greenwich, Connecticut. This later developed into a position with the Atlantic and Pacific Tea Company, a retail chain that had decided to expand into floristry. Noticing that the stresses of work were affecting her health, Kathlyne later decided to moved to Florida, where she improved tremendously. She worked and lived in both Fort Lauderdale and Boca Raton, before deciding to move to Hawaii with her son. Soon after, Kathlyne was confined to bed with osteoporosis. Instead of slipping into depression, however, she began to read and study the word of the Lord. She also became active in numerous church groups. A Walk In David's Garden was borne from this time of contemplation and recovery. Kathlyne currently resides on Vancouver Island, B.C., Canada. Chapter One 1 1 Samuel 16 verses 12 and 13; And he sent, and brought him in. Now he was ruddy, and withal of a beautiful countenance and goodly to look at. Then Samuel took the horn of oil and anointed him in the midst of his brethren. The spirit of the Lord came upon David from that day forward. 1 Samuel 13 verse 14: the Lord has sought him a man after his own heart. And the Lord hath commanded him to be captain over his people. Soft soul stirring sounds that please, notes from David's pipes, Sighing on the mornings breeze. The youngest son of Jesse, was sent out with the flocks. Where he grew with strength and boldness, fearlessly killing the lion and the bear, that struck from the wilderness trees and rocks. Quiet hours were spent studying God's word, His praise and prayers to the Lord were heard. With courage born of faith, he confronted Goliath and slew the mighty giant. Late at night a cascade of notes, echoing through the gilded halls, tinkling cadences, plucked on the strings of David's harp. Soothing staying the illness growing, within Saul's mind and heart. David called to palace duty. Chosen of God, golden youth who walked in humbleness and truth. He would not kill Saul, the king anointed, even tho' he stalked David, the Lord's appointed. Mighty warrior, he became an obedient king, who taught his people to praise and sing. He coveted anothers wife and murder entered into his life. Of sin he did repent. His midnight hours were spent in prayer and psalm writing. From Oran, he bought land upon which God's temple would stand. The king was in failing health, but continued to amass great wealth. O'Soloman your name means peace, now all wars and bloodshed will cease. You were chosen to build the temple of the Lord, because you did not live by the sword. David followed God's command, telling his son to build upon the land. "Saying I give my crown to thee, a great and glorious ruler you will be." The Lord loved David and knew his heart, He said, of the future David would be a part. From the stump of Judah's tree, came forth a Branch, that shall not die, but will be green throughout eternity. In God's eyes he was like a tender
Loading...
or support indie stores by buying on