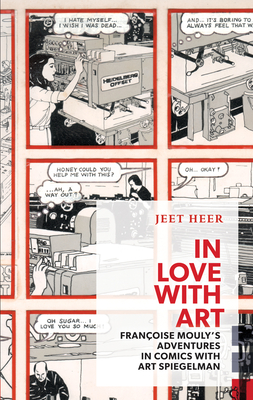 In Love with Art

Jeet Heer more thoroughly and widely understands comics history and the perplexing binomial life of the cartoonist better than anyone who's not one. As well-versed in literature as he is in comics, he always gets at the peculiar, poetical texture of his subject not only by what he writes, but how he writes it--clearly, mellifluously, and beautifully. Our humble discipline is singularly lucky to have him telling its story.--Chris Ware

In a partnership spanning four decades, Fran oise Mouly and Art Spiegelman have become the pre-eminent power couple of cutting-edge graphic art. Their landmark magazine Raw, which first published artists such as Ben Katchor, Chris Ware, and Charles Burns, brought an avant-garde sensibility to comics and, along with Spiegelman's legendary graphic novel Maus, completely revolutionized the form. As art editor of the New Yorker since 1993, Mouly has remade the face of that venerable magazine with covers that capture the political and social upheavals of the last two decades, such as the black-on-black cover after 9/11 and the infamous Barack Obama fist-bump cartoon. Based on exclusive interviews with Mouly, Spiegelman, and a pantheon of comics artists--including Dan Clowes, Barry Blitt, Anita Kunz, and Adrian Tomine--In Love with Art is both an intimate portrait of Mouly and a rare, behind-the-scenes look at some of today's most iconic images. Through the prism of an uncommonly successful relationship, the book tells the story of one of the most remarkable artistic transformations of our time.

Jeet Heer's writing has appeared in the Guardian, Slate, Boston Globe, the American Prospect, and the Virginia Quarterly Review.

Jeet Heer: A cultural journalist and academic who divides his time between Toronto and Regina, Heer has written for many publications including the National Post, Slate.com, the Boston Globe, The Walrus, The American Prospect, the Virginia Quarterly Review and the Guardian of London.
Loading...
or support indie stores by buying on