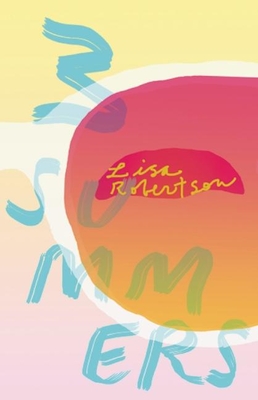 Recite your poem to your aunt.
I threw myself to the ground.
Where were you in the night?
In a school among the pines.
What was the meaning of the dream?

Organs, hormones, toxins, lesions: what is a body? In 3 Summers, Lisa Robertson takes up her earlier concerns with form and literary precedent, and turns toward the timeliness of embodiment. What is form's time? Here the form of life called a poem speaks with the body's mortality, its thickness, its play. The 10 poem-sequences in 3 Summers inflect a history of textual voices -- Lucretius, Marx, Aby Warburg, Deleuze, the Sogdian Sutras -- in a lyricism that insists on analysis and revolt, as well as the pleasures of description. The poet explores the mysterious oddness of the body, its languor and persistence, to test how it shapes the materiality of thinking, which includes rivers and forests. But in these poems' landscapes, the time of nature is inherently political. Now only time is wild, and only time -- embodied here in Lisa Robertson's forceful cadences -- can tell. 'Robertson proves hard to explain but easy to enjoy. . . . Dauntlessly and resourcefully intellectual, Robertson can also be playful or blunt. . . . She wields language expertly, even beautifully.'--The New York Times 'Robertson makes intellect seductive; only her poetry could turn swooning into a critical gesture.'-- The Village Voice Lisa Robertson's books include Cinema of the Present, Debbie: An Epic, The Men, The Weather, R's Boat and Occasional Works and Seven Walks from the Office for Soft Architecture. Lisa Robertson's Magenta Soul Whip was named one of The New York Times' 100 Notable Books. She lives in France.

Lisa Robertson: Poet and essayist Lisa Robertson has held residencies at the California College of the Arts, Cambridge University; University of California, Berkeley; UC San Diego; and American University of Paris. Her books include Cinema of the Present, Debbie: An Epic (nominated for the Governor General's Award in Canada), The Men, The Weather, R's Boat (poetry) and Occasional Works and Seven Walks from the Office for Soft Architecture (essays). Lisa Robertson's Magenta Soul Whip (Coach House) was named one of The New York Times 100 Notable Books of 2010, and was longlisted for the 2011 Warwick Prize for Writing. She currently lives in France.
or support indie stores by buying on