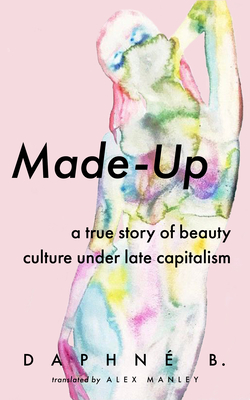 A True Story of Beauty Culture Under Late Capitalism

A nuanced, feminist, and deeply personal take on beauty culture and YouTube consumerism, in the tradition of Maggie Nelson's Bluets.

As Daphn B. obsessively watches YouTube makeup tutorials and haunts Sephora's website, she's increasingly troubled by the ways in which this obsession contradicts her anti-capitalist, intersectional feminist politics.

In a looks-obsessed, selfie-covered present where influencers make the world go round, she brings us a breath of fresh air: an anti-capitalist look at a supremely capitalist industry, an intersectional feminist look at a practice many consider misogynist. Blending together the confessional, the poetic, and the essayistic, Made-Up is a lyric meditation on an industry in full bloom.

Made-Up explores the complicated world of makeup, from how it's made to how we wear it, talking about gender, identity, capitalism, and pop culture in the process. Makeup doesn't get a lot of serious attention; it's often derided as shallow. But Daphn proves that it's worth looking at a little more in-depth.

The original French-language edition was a cult hit in Quebec. Translated from the French by Alex Manley--like Daphn , a Montreal poet and essayist--the text crackles with life, retaining the flair and verve of the original, and ensuring that a book on beauty is no less beautiful than its subject matter.