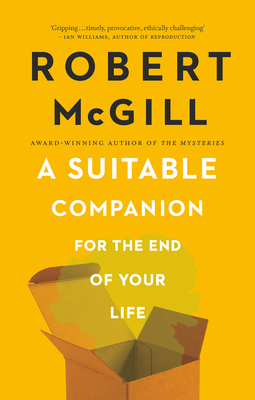 A Suitable Companion for the End of Your Life

A bold and absurd new take on the dystopian plague novel, where people are treated like IKEA furniture

Distraught and hopeless, an eighteen-year-old distance runner, Regan, decides to end her life. And she'll do it through an unusual new method available only on the dark web. Enter lle, a woman with amnesia, who will, inadvertently, make Regan's wish come true.

But lle begins to remember her past and the outrageous steps her government took to combat a deadly pandemic of parasitic infections, which have brought her to this new country and to Regan's house. Meanwhile, Regan might be changing her mind, and she finds herself more and more concerned about keeping both lle and herself alive. But the shadowy organization that brought them together wants to keep them both quiet - permanently.

A Suitable Companion for the End of Your Life is a darkly comic dystopian tale that probes our anxieties around boundaries, whether territorial or bodily, and our fraught desire not to die alone.

"Gripping from the first page, Robert McGill's A Suitable Companion for the End of Your Life is a dark, speculative novel with echoes of The Handmaid's Tale, set against the backdrop of a plague. Some of us would do anything to survive, down to flatpacking ourselves like IKEA furniture, while others would do anything to make our miserable lives end. This is timely, provocative, ethically challenging fiction that asks whether the drive to survive is stronger than the inevitability of death." -Ian Williams, author of Reproduction

"Terrifying and tender, A Suitable Companion's sci-fi angle serves to frame a fascinating parable about the post-post-modern family. Unpredictable and completely original, this is a propulsive, rewarding, and thought-provoking read." -Michael Redhill, author of Bellevue Square

​​"The guy knows what he's doing, from missing children to silk parachutes, you are never lost and he will catch you." - Zadie Smith, author of Swing Time

"A storyteller who refuses to keep things straight, and for this produces freshly captivating effects." - Andrew Pyper, author of The Demonologist

"A writer of striking talent and originality." - Daily Mail on The Mysteries

"McGill is a talented writer, adept at expressing the nuanced, unspoken truths that beg the lies by which we live." - Observer on The Mysteries

Robert McGill's writing has appeared or is forthcoming in magazines including The Atlantic, The Dublin Review, Hazlitt, and The Walrus. He teaches at the University of Toronto. His previous books include two novels, The Mysteries and Once We Had a Country, and two nonfiction books, The Treacherous Imagination and War Is Here. Visit him at robert-mcgill.com.
Loading...
or support indie stores by buying on