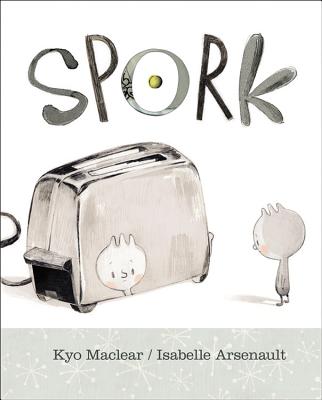 Spork sticks out in the regimented world of the cutlery drawer. The spoons think he's too pointy, while the forks find him too round. He never gets chosen to be at the table at mealtimes until one day a very messy ... thing arrives in the kitchen who has never heard of cutlery customs. Will Spork finally find his place at the table?

This ?multi-cutlery? tale is a humorous and lively commentary on individuality and tolerance. Its high-spirited illustrations capture the experience and emotions of anyone who has ever wondered about their place in the world.

... her message of acceptance will resonate, particularly with parents.—Booklist

It's a story that could wilt under the weight of moral high-mindedness, but the graceful voice of Maclear, making her children's book debut, keeps it light and entertaining.—Publishers Weekly

... the lighthearted storytelling and whimsical mixed-media illustrations will draw readers in, and adults will find the book to be a useful conversation starter for the topics of race, difference, and acceptance.—School Library Journal

Kyo Maclear is an award-winning writer and novelist. Her first book for children, Spork, has received a number of honors, including a 2011 Marilyn Baillie Picture Book Award nomination. She lives in Toronto, Ontario.

Isabelle Arsenault has illustrated several children's books, including Spork, My Letter to the World and Other Poems and Mr. Gaugin's Heart. She has received many awards for her work, including the Governor General's Award for Illustration. She lives in Montreal, Quebec.