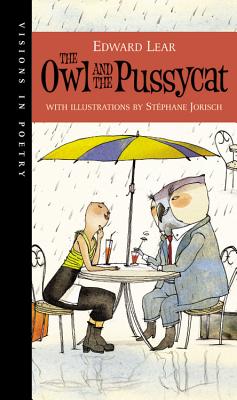 The Owl and the Pussycat (Visions in Poetry)

Visions in Poetry is an innovative and award-winning series of classic poems re-interpreted for today's readers by outstanding contemporary artists in distinctively beautiful editions.

The sixth Visions in Poetry book is The Owl and the Pussycat, a nonsense poem by Edward Lear, brilliantly illustrated by Stéphane Jorisch. The artist's vision begins in a segregated world where different species never mix and everyone hides behind a mask. Against this backdrop an aristocratic owl from Owl Heights and a bohemian pussycat from the other side of the tracks find each other.

They escape society's disapproval by sailing in their pea green boat to ?the land where the bong-tree grows,? a utopia of mismatched creatures living together, their masks doffed for good. Jorisch's playful and fantastic interpretation, inspired in part by Lear's own illustrations as well as the films of Fellini, the art of Miro and The Beatles' Yellow Submarine, is a celebration of love and an exhilarating journey that takes us beyond the quirky charm of this favorite poem.

Praise For The Owl and the Pussycat (Visions in Poetry)…

... offers readers a sophisticated re-imagining of Lear's classic children's poem without losing any of its traditional whimsy in the doing.—Kirkus Reviews

Stéphane Jorisch's work has won many awards, including three Governor General's Awards for Illustration. He lives in Montreal, Quebec.