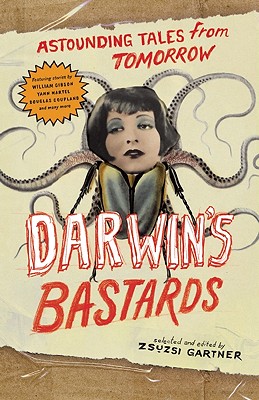 These 23 stories take us on a twisted fun ride into some future times and parallel universes where characters as diverse as a one-legged International Actuarial Forensics specialist, a pharmaceutical guinea pig, and a far-sighted fetus engage in their own games of the survival of the fittest. From a new short story by William Gibson in which a teen disassociated from his body haunts his neighborhood through the decades, to Douglas Coupland’s balls-out satire of a slightly futuristic Survivor, to Sheila Heti's meditative romp about beleaguered physicists and Oracle of Delphi-like Blackberrys, Darwin’s Bastards is a fast-moving, thought-provoking reading extravaganza.

"...sometimes cynical, sometimes melancholy and very often humorous looks at a social landscape not all that different from our own...Darwin's Bastards may not say much about the future, but it has plenty to tell us about the way we live today.”Los Angeles Times

...one ideal kind of anthology...Gartner’s introduction is an excellent entrée into it, too, being finely balanced between intellect and humor.”
Booklist, Apr 13, 2010

beyond getting a glimpse of reality through the lens of the future fantastic, the best reason to read this collection is that it is damn entertaining, and funny too. there truly isn’t a bad one in the bunch”
The Globe and Mail

Zsuzsi Gartner is an award winning journalist and author of the critically acclaimed story collection "All The Anxious Girls on Earth." A former editor at "Saturday Night magazine," she is currently fiction editor of the Vancouver Review. Her stories have been produced on radio, including on NPR read by "Sex in the City"'s Cynthia Nixon!. She lives in Vancouver, BC.
Loading...
or
Not Currently Available for Direct Purchase