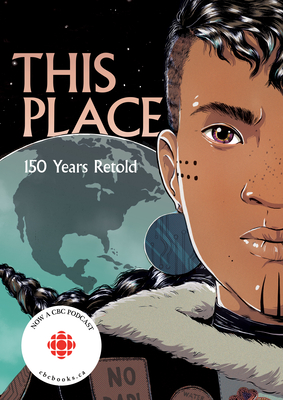 Explore the past 150 years through the eyes of Indigenous creators in this groundbreaking graphic novel anthology. Beautifully illustrated, these stories are an emotional and enlightening journey through Indigenous wonderworks, psychic battles, and time travel. See how Indigenous peoples have survived a post-apocalyptic world since Contact.

This is one of the 200 exceptional projects funded through the Canada Council for the Arts' New Chapter initiative. With this $35M initiative, the Council supports the creation and sharing of the arts in communities across Canada.

KATERI AKIWENZIE-DAMM is a writer, poet, spoken-word performer, librettist, and activist from the Saugeen Ojibway Nation. She is the founder and Managing Editor of Kegedonce Press which was established in 1993 to publish the work of Indigenous creators. Kateri has written two books of poetry, was a contributor to the graphic novel anthology This Place: 150 Years Retold, was editor of the award-winning Skins: Contemporary Indigenous Writing, and has also released two poetry and music CDs. Kateri's work has been published internationally, and she has performed and spoken around the world. SONNY ASSU is an interdisciplinary artist whose diverse practice is informed by a deep connection to Kwakwaka'wakw art and culture and melded with western/pop principles of art making. His work has been accepted into the National Gallery of Canada, Seattle Art Museum, Vancouver Art Gallery and into various public and private collections across Canada, the US, and the UK. He currently resides in unceded Ligwilda'xw territory (Campbell River, BC). From Listuguj, Quebec, BRANDON MITCHELL is the founder of Birch Bark Comics and creator of the Sacred Circles comic series, which draws on his Mi'kmaq heritage. He has also written five books with the Healthy Aboriginal Network, (Lost Innocence, Drawing Hope, River Run, Making it Right, and Emily's Choice) and wrote and illustrated Jean-Paul's Daring Adventure: Stories from Old Mobile for the University of Alabama. Of Inuit-Cree ancestry, RACHEL QITSUALIK-TINSLEY was born in a tent on northernmost Baffin Island. She learned Inuit survival lore from her father, surviving residential school and attending university. In 2012, she was awarded a Queen Elizabeth II Diamond Jubilee Medal for numerous cultural writings. Of Scottish-Mohawk ancestry, SEAN QITSUALIK-TINSLEY was born in southern Ontario, learning woodcraft and stories from his father. Training as an artist, then writer, Sean's sci-fi work won 2nd place at the California-based Writers of the Future contest, published by Galaxy Press. Rachel and Sean have worked for decades as Arctic researchers and consultants. In writing together, they have published 10 successful books and many shorter works, celebrating the history and uniqueness of Arctic shamanism, cosmology, and cosmogony. Their novel, Skraelings: Clashes in the Old Arctic, was a Governor General Awards Finalist and First Prize Burt Award winner. DAVID A. ROBERTSON is an award-winning writer. His books include When We Were Alone (winner Governor General's Literary Award), Will I See? (winner Manuela Dias Book Design and Illustration Award), Betty, The Helen Betty Osborne Story (listed In The Margins), and the YA novel Strangers (winner of The Michael Van Rooy Award for Genre Fiction). David educates as well as entertains through his writings about Indigenous Peoples in Canada, reflecting their cultures, histories, communities, as well as illuminating many contemporary issues. David is a member of Norway House Cree Nation. He lives in Winnipeg. NIIGAANWEWIDAM JAMES SINCLAIR, PhD., is Anishinaabe (St. Peter's/Little Peguis) and an assistant professor at the University of Manitoba. He regularly speaks and writes about Indigenous issues for CTV, CBC, The Guardian, and APTN, as well as in The Exile Edition of Native Canadian Fiction and Drama. Niigaan is co-editor of the award-winning Manitowapow: Aboriginal Writings from the Land of Water and Centering Anishinaabeg Studies: Understanding the World Through Stories. He is also editorial director of The Debwe Series, published by HighWater Press. JEN STORM is an Ojibway writer from the Couchiching First Nation in Northwestern Ontario. Born and raised in Winnipeg, Manitoba, Jen completed Deadly Loyalties, her first novel, at age fourteen. Fire Starters was her first graphic novel. Jen was a 2017 recipient for the CBC Manitoba's Future 40 Over 40. She can be found on Instagram @jenstorm_art where she shares her passion for creating art and updates on future projects. RICHARD VAN CAMP is a proud member of the Tlicho Nation from Fort Smith, Northwest Territories. He is the author of 22 books including The Lesser Blessed (also a feature film), the Eisner Award nominated graphic novel, A Blanket of Butterflies (with Scott B. Henderson), and Three Feathers (also a feature film). He is a contributor to the groundbreaking graphic novel anthology This Place: 150 Years Retold. Richard is also the author of four collections of short stories, including Night Moves, and five baby books, including the award-winning Little You (with Julie Flett). KATHERENA VERMETTE is a Mtis writer from Treaty 1 territory, the heart of the Mtis nation, Winnipeg, Manitoba, Canada. Her first book, North End Love Songs (The Muses Company) won the Governor General's Literary Award for Poetry. Her National Film Board documentary, this river, won the 2017 Canadian Screen Award for Best Short, and her novel, The Break (House of Anansi), won the 2017 Amazon.ca First Novel Award. She holds a Master of Fine Arts from the University of British Columbia, and lives in Winnipeg, Manitoba. CHELSEA VOWEL is Mtis from manitow-skahikan (Lac Ste. Anne) Alberta, currently residing in amiskwacwskahikan (Edmonton). Mother to six girls, she has a BEd and LLB, and is currently a graduate student and Cree language curriculum developer. Chelsea is a public intellectual, writer, speaker, and educator whose work intersects language, gender, Mtis self-determination, and resurgence. Her collection of essays, Indigenous Writes, is a national bestseller (HighWater Press, 2016). Cohost with Molly Swain of Indigenous feminist sci-fi podcast Mtis in Space, Chelsea blogs at apihtawikosisan.com and makes auntie-approved legendary bannock.
Loading...
or support indie stores by buying on