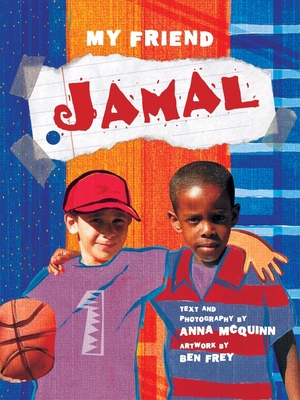 Jamal and Joseph were born in the same hospital in the same month. Now they're best friends. The two like to play at one another's homes. Joseph's mom knows Jamal can't eat pork sausages because he's Muslim. She knows, too, that he can't have ice cream because of his eczema. Some things that happen at Jamal's house are a lot different from Joseph's: the food his mother prepares, the way they sit to eat, and the special clothes they sometimes wear. Jamal and Joseph like to play superheroes and cheer their favorite basketball stars. They even say they're going to sign with the same team when they grow up. A poignant story about a childhood friendship where unfamiliar cultures meet, My Friend Jamal lets readers sample the differences and recognize the powerful bond that draws two boys together. The visuals, which marry photography and original art, are wonderfully playful and imaginative.

Anna McQuinn is a part-time writer whose literacy workshops often involve children and families for whom English is not their first language. Her picture books include "Lola at the Library" and "Wanda's Washing Machine." She lives in England. Ben Frey has been an animator for internationally syndicated television shows, a screenprinter and a gallery director. This is his first book. He lives in Vancouver, British Columbia.
Loading...
or
Not Currently Available for Direct Purchase