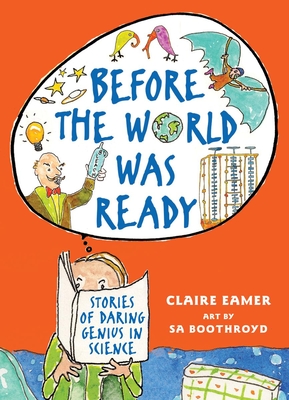 Before the World Was Ready

Stories of Daring Genius in Science

Eight fascinating tales of scientists and inventors ahead of their time. In this thought-provoking book, you'll find out what happened when people weren't ready to listen to innovators who came up with revolutionary ideas. Discover how Alfred Wegener struggled to convince geologists that the ground beneath our feet is moving, why "mad scientist" Nikola Tesla's futuristic ideas about electricity were dismissed, why Charles Darwin delayed publishing his controversial theory of evolution for decades, and how Charles Babbage and Ada Lovelace nearly invented the first computer in the 1800s. You'll also meet Copernicus, who proposed a sun-centered model of the universe; Ignaz Semmelweis, who tried in vain to persuade doctors to use disinfection methods; the aviation pioneer George Cayley, whose ideas were decades ahead of the technology that would make them work; and Rachel Carson, who sounded the first alarm about the effects of pesticides on wildlife. Nowadays, we think of these scientists as heroes, but they all endured great personal hardships for daring to think differently. Enlivened by colorful and witty illustrations, these compelling stories of great minds--and often eccentric personalities--are sure to draw in young readers. Look around: can you spot the next world-shaking idea?