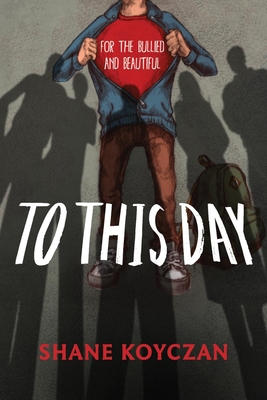 To This Day (Hardcover)

For the Bullied and Beautiful

An authentic rallying cry for anyone who has been affected by bullying. In February 2013, Shane Koyczan's passionate anti-bullying poem To This Day electrified the world. An animated video of the lyric narrative went viral, racking up over 12 million hits to date and inspiring an international movement against bullying in schools. Shane later performed the piece to sustained applause on the stage of the 2013 annual TED Conference. Now this extraordinary work has been adapted into an equally moving and visually arresting book. Thirty international artists, as diverse as they are talented, have been inspired to create exceptional art to accompany To This Day. Each page is a vibrant collage of images, colors and words that will resonate powerfully with anyone who has experienced bullying themselves, whether as a victim, observer, or participant. Born of Shane's own experiences of being bullied as a child, To This Day expresses the profound and lasting effect of bullying on an individual, while affirming the strength and inner resources that allow people to move beyond the experience. A heartfelt preface and afterword, along with resources for kids affected by bullying, make this book an invaluable centerpiece of the anti-bullying movement.

Shane Koyczan, 21st century spoken-word artist extraordinaire, has brought audiences to their feet around the world. Shane is the winner of the U.S. Slam Poetry Championship and Canadian Spoken Word Olympics. He has been featured on BRAVO television, NPR, BBC and CBC radio, and performed at the opening ceremonies of the 2010 Winter Olympics in Vancouver. His website is www.shanekoyczan.com.
or
Buy Here
Copyright © 2020 American Booksellers Association