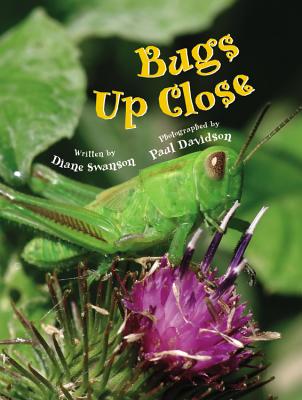 We live on a bug planet. Not only are insects the most numerous species on Earth, they've survived for 400 million years and show no signs of slowing down. Take a look outside: little creatures are creeping, jumping and flying everywhere.

Did someone say little?

Not in this book. In these eye-popping, oversized pages, bugs say cheese big time! Through Paul Davidson's powerful camera lens, see a fly the size of a man's shoe, the 30,000-odd lenses in a dragonfly's eyes, the hair on a bee's legs and much more. Bug-loving science writer Diane Swanson delivers fascinating info about buggy lives, buggy eating and lots of buggy bits, such as antennae, wings and weapons, that help make insects the most widespread animals on Earth.

Diane Swanson is an award-winning writer of more than 70 books for children, especially nature and science. Originally from Alberta, she now resides in Victoria, British Columbia. She writes a bug column for YES magazine and is buggy about bugs.

In addition to being a photographer, Paul Davidson is a systems engineer who has worked on projects for Bell-Northern Research, NASA and other high-tech organizations. Originally from Ottawa, Ontario, Paul now lives in Quebec.


Praise For Bugs Up Close…

Bugs fill important niches in our world. We need them and you need this book. Highly Recommended.—Library Media Connection

For a swarm of fascinating facts, this title is highly recommended.—Star Phoenix
or
Not Currently Available for Direct Purchase
Copyright © 2020 American Booksellers Association