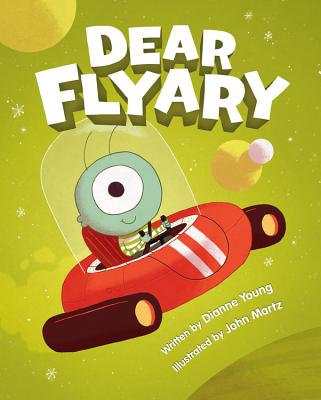 One-eyed alien Frazzle recounts his flying adventures in a new journal (in alien vernacular, of course). He bighearts his little Model 7, but as time passes, it starts making strange sounds, and Frazzle --- pressured by friends and co-workers --- wonders if he should trade it in. One day, when it goes CLUNK in the middle of the flyway, it's clear something must be done. Youngsters will love the out-of-this-world illustrations depicting worlds rife with all manner of alien life. Even more irresistible: an unexpected ending sure to delight careful readers.

Dianne Young won the 1992 Saskatchewan Writers Guild Literary Award for Children's Literature. Her previous titles include A World of Difference and Purple Hair? I Don't Care! Dianne lives in Martensville, Saskatchewan.John Martz is an illustrator, cartoonist and graphic designer. He won a 2011 Joe Shuster Award and has twice been nominated for a Doug Wright Award. John is also cofounder of the illustration blog ?Drawn!?. John lives in Toronto, Ontario.
or
Not Currently Available for Direct Purchase
Copyright © 2020 American Booksellers Association