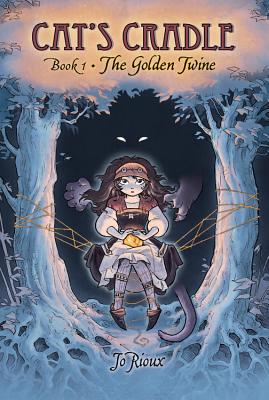 Now available as a motion comic

In this steampunk fantasy graphic novel, an orphan girl named Suri, barely earning her keep with a traveling merchant camp, has ambitions of becoming a heroic monster tamer. Suri is convinced monster taming is her destiny, defiantly explaining to those who deride her that she was born in ?the land of monsters? and ?was carried into this valley in the arms of a fire-breathing dragon.? But while Suri may be brave enough to challenge a monster, she still has quite a few lessons to learn about their world. Like how sometimes the most frightening-looking monsters are actually not scary at all up-close, while a normal-looking boy can prove to be terrifying. And sometimes a perfectly ordinary object, like the ball of golden twine Suri finds in the woods, can turn out to contain the most mysterious and powerful magic she could ever imagine

With a multilayered plot, a range of intriguing characters and a smart protagonist whose sights are set on a seemingly impossible task, this first book from Jo Rioux seamlessly lays out the fantastic world the stories inhabit. The dark and spooky illustrations are infused with an energy that leaps off the page and, along with the story's numerous plot twists and savvy humor, are sure to keep even reluctant readers flying through the pages. Besides its general appeal to readers, this book could be applied to a language arts lesson on the components of genre fiction.