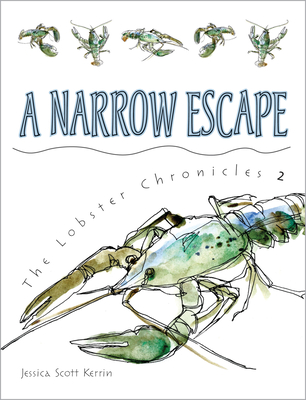 Norris is always messing up: he steals from Georgia's lunches, he's an awful speller and, worst of all, he ruined Ms. Penfield's prize cactus. Really, though, he wants nothing more than to be liked. When a giant lobster is up for auction at the annual lobster festival, Norris's dad, the richest man in town, vows to be the highest bidder and make it a trophy. But Norris knows that won't win people's respect. Can Norris do the right thing for once?

A Narrow Escape is the second book in The Lobster Chronicles, a trilogy about how life changes for three boys in a small coastal town when a giant lobster is caught. Each book describes the same events through a different boy's eyes, making for three suspenseful, believable stories and an engrossing reading experience.

Jessica Scott Kerrin is the author of the bestselling Martin Bridge series, inspired by the misadventures of her husband and son. Her first novel, Martin Bridge: Ready for Takeoff! was named an ALA Notable Children's Book and placed on the Horn Book Fanfare List. Kerrin grew up on the Canadian prairies, but now lives with her family and pet tortoise in Halifax, Nova Scotia.

A tough but realistic view of the inner workings of a rather nasty boy.—Kirkus Reviews
or
Not Currently Available for Direct Purchase
Copyright © 2020 American Booksellers Association