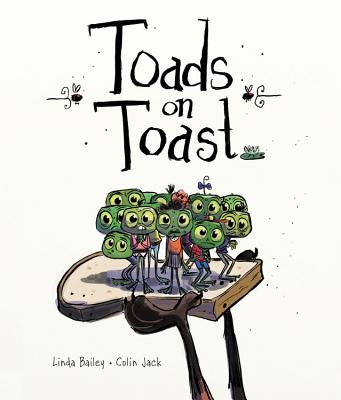 As this delightful picture book opens, Fox is bored of his usual meal of plain old toad, so he turns to a cookbook of toad recipes for inspiration. Having caught a sackful of small, young toads as recommended, Fox is deciding on a recipe when he is startled by the appearance of the mother of these small ?toadlets,? who is horrified to discover that Fox is planning to eat her babies. ?Stop!? she commands him, to no avail. Mamma Toad frantically tries everything in her power to save her offspring, even offering herself for Fox to eat. But nothing works. Until she suggests preparing her own delicious ?secret? recipe for Fox instead¬ --- Toad-in-the-Hole. (The secret? No toads!)
Linda Bailey's story will thoroughly entertain pre-readers, as it hits the right notes of droll humor spiced with just enough suspense. The lively artwork by Colin Jack keeps the energy level high, and the scenes of the toadlets wreaking havoc on fox's kitchen while he is distracted --- rolling in honey, pelting canned peas at each other, parachuting off the cabinet using bread slices --- provide a funny visual subplot to the story that will keep youngsters involved. This book would provide a wonderful starting point for conversations about how sometimes the person who seems the strongest isn't the winner in the end, which could tie into a character education lesson on perseverance. It might also launch a discussion about trying new foods, after which the included recipe could be prepared as a classroom activity.

Linda Bailey is an award-winning author of many books for children, including Goodnight Sweet Pig, Stanley's Party, the Stevie Diamond Mysteries, and the Good Times Travel Agency series. She lives in Vancouver, British Columbia.

Colin Jack works as a story artist and character designer in the animation industry, and has been involved in such productions as Hotel Transylvania, Grossology and Ed, Edd n Eddy. He lives in Toronto, Ontario, with his wife and their two toadlets.


Praise For Toads on Toast…

With cheeky illustrations, a smart, humour-filled story and a recipe you can make at home, you can expect to read this book again and again.—Canadian Family

Bailey's dialogue is snappy and amusing, and the illustrations recall the scrappy TV-animation style of Chuck Jones.—The New York Times

... almost 100 percent of your students will want to hear the book again.—Kirkus Reviews
or
Buy Here
Copyright © 2020 American Booksellers Association