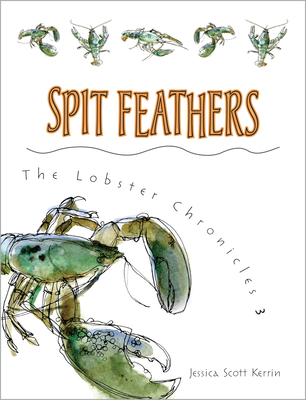 Ferguson is trying to help his grandfather figure out his legacy. His grandfather doesn't want to have any regrets, like his old friend McDermit, who famously caught a giant lobster but regretted not returning it to sea. So when another giant lobster is caught in their fishing community and put up for auction, Ferguson cooks up a plan with his grandfather to bid on the lobster and set it free. Will this be his grandfather's legacy or will the town's richest man ruin everything?

Spit Feathers is the third book in The Lobster Chronicles, a trilogy about how life changes for three boys in a small coastal town when a giant lobster is caught. Each book describes the same events through a different boy's eyes, making for three suspenseful, believable stories and an engrossing reading experience.

This concluding volume in an interesting concept series is strengthened by colorful characters.—Kirkus Reviews

Jessica Scott Kerrin is the author of the bestselling Martin Bridge series, inspired by the misadventures of her husband and son. Her first novel, Martin Bridge: Ready for Takeoff! was named an ALA Notable Children's Book and placed on the Horn Book Fanfare List. Kerrin grew up on the Canadian prairies, but now lives with her family and pet tortoise in Halifax, Nova Scotia.
or
Not Currently Available for Direct Purchase