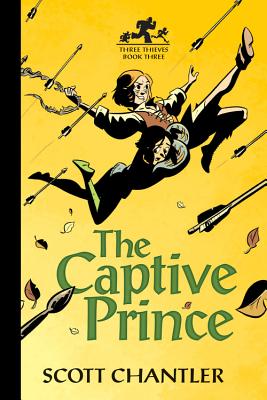 Book three of the acclaimed Three Thieves graphic novel series begins with Dessa, Topper and Fisk, still on the run from the Queen's Dragons, stopping to make camp for the night. While collecting firewood, Dessa happens upon a kidnapping and manages to boldly rescue the captive boy and bring him to safety. Once out of harm's way, the boy reveals that he is Paladin, the crown prince of Medoria! Upon Paladin's safe return to his kingdom, his father, King Victor the Fourth, decrees three days of celebration in tribute to the three heroes who have saved his precious only son. Dessa, Topper and Fisk know they are taking a risk by remaining in the castle for all that time, but how can they refuse the king? And to make things trickier still, is the charming prince falling for Dessa?

The cinematic artwork in this series offers a fully visual experience for young readers looking for an exciting tale of adventure, told in episodes. Dessa's derring-do is on display once again as she's seen swinging into action to save the prince's life (twice!), among other exploits. The fast pace alone is enough to keep young readers turning the pages. Creator Scott Chantler has also crafted a tremendously intriguing fantasy world in these books, fleshing out the intricacies a bit more with every installment. The layers and connections between characters promote critical thinking, while the masterful storytelling provides terrific opportunities for studying story components and literature.

Scott Chantler is an award-winning cartoonist. He lives in Waterloo, Ontario.

Scott Chantler is an award-winning cartoonist. He lives in Waterloo, Ontario.

... heaps of charm ... snappy, colorful artwork ... this one can stand well on its own, though it successfully expands on the growing epic.—Booklist Online

Nary a dull moment, nor even a slow one in this escapade's latest outing.—Kirkus Reviews
or
Not Currently Available for Direct Purchase
Copyright © 2020 American Booksellers Association