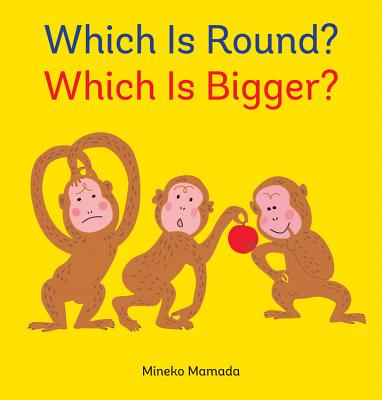 Which Is Round? Which Is Bigger? (Hardcover)

On the first two-page spread of this deceptively simple picture book, the text asks, ?Which one is round?? There are two straightforward drawings showing the choices: an apple or an armadillo. For the child who understands what round means, that's an easy one --- the apple is round. Until you turn to the next spread. There you'll see that the same question is asked, ?Which one is round? What do you think?? But this time, the apple has been eaten down to its (unround) core, and the armadillo is asleep, curled into a (round) ball. Surprise! Though the objects being featured are the same, the answer to the question has now changed.

This interactive concept book, written and illustrated by Mineko Mamada, contains six such pairs, illustrated with appealing, unfussy colored drawings. For each pair, children are asked to compare them based on their shape, size, height, speed or color. As with the apple and the armadillo, at first the answer to the question seems obvious, but then a turn of the page provides an unexpected twist. Young children get drawn in, first to figure out the easier answer, then to laugh when they discover the new way of looking at things. This is a unique, innovative approach to the popular concept of comparatives. It's a terrific tool for promoting school readiness with preschoolers in areas such as observation, critical thinking and creativity. But with its playful spirit, young children will just see it as a lot of fun!

Author-illustrator Mineko Mamada has published several children's books in her native Japan, where she also works as a graphic designer. Which Is Round? Which Is Bigger? is her first book to be translated into English. Mineko lives in Tokyo.

Author-illustrator Mineko Mamada has published several children's books in her native Japan, where she also works as a graphic designer. Which Is Round? Which Is Bigger? is her first book to be translated into English. Mineko lives in Tokyo.


Praise For Which Is Round? Which Is Bigger?…

The short text leaves the explanations to viewers of the clean, digital artwork, which showcases each idea with clarity, energy, and a touch of humor. ... Sure to inspire critical thinking, light bulb moments, and laughter, this picture book makes a terrific read-aloud choice.—Booklist, Starred Review