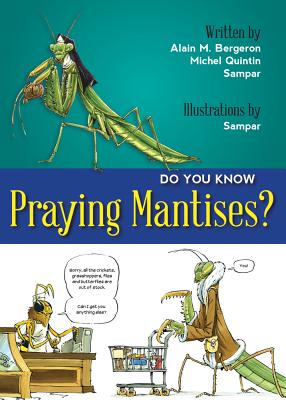 Do you know? Thanks to its green and brown coloration, the praying mantis blends in perfectly with its environment. It's not rare for newborn praying mantises to eat each other. Even when its head has been decapitated from its body, the female will continue to lay eggs.

Alain Bergeron is a Quebec writer born September 24, 1957. Before becoming a full-time youth author in the fall of 2005, he was a reporter for twenty years in Victoriaville. The least we can say is that he is a very prolific writer, with over 130 books! He writes for various youth age groups, and publishes between 15 and 20 titles a year. Samuel Parent, pen name Sampar, was born in 1973 in Victoriaville, Quebec. He is a self-taught illustrator and cartoonist. He made his mark in recent years in the publishing world by being a winner of the New York Times top 10 illustrators of the year for 2014 and by being a finalist for the Governor General of Canada 2004 (Youth illustration). He has also been a Mr. Christie's Book Award 2002 finalist Awards, a favourite books Youth Communication-Jeunesse finalist, and a Hackmatack Award finalist in 2003 and 2004. Sampar's illustrations fascinate and capture the imagination of young and old alike. He is the father of three children and admits: "My dream is to make sure that my children can have something from me when they are old enough to be interested in reading."
Loading...
or
Not Currently Available for Direct Purchase