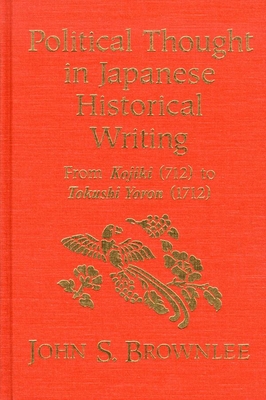 It was only at the onset of the Tokugawa period (1602-1868) that formal political thought emerged in Japan. Prior to that time Japanese scholars had concentrated, rather, on questions of legitimacy and authority in historical writing., producing a stream of works. Brownlee's illuminating study describes twenty of these important historical works commencing with Kojiki (712) and Nihon Shoki (720) and ending with Tokushi Yoron (1712) by Arai Hakuseki. Historical writing would cease to be the sole vehicle for political discussion in Japan in the eighteenth century as Chinese Confucian thought became dominant.

The author illustrates how the first works conceptualized history as imperial history and that subsequent scholars were unable to devise alternative schemes or patterns for history until Arai Hakuseki. Following the first histories, the central concern became the question of the relation of the Emperors to the new powers that arose. Brownlee examines the genre of Historical Tales and how it treated the Fujiwara Regents, the War Tales dealing with warriors at large, and specific works of historical argument depicting the Bakufu in relation to the Emperors. By interposing the works of Gukansh (1219) by Jien, Jinn Sh t ki (1339) by Kitabatake Chikafusa and Tokushi Yoron by Arai Hakuseki a clear pattern, demonstrating the sequential development of complexity and sophistication in handling the question, is revealed. Japanese political thought thus developed independently towards rationalism and secularism in early modern times.