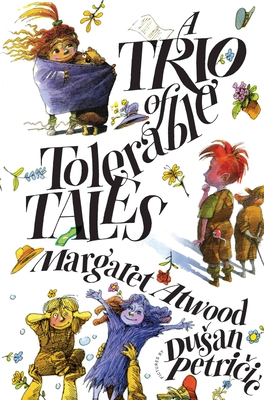 A Trio of Tolerable Tales

Wordplay and outrageous adventures rule the day in these three humorous stories from Margaret Atwood, with illustrations by Dusan Petricic. Now published together in a chapter book for the first time In Rude Ramsay and the Roaring Radishes, Ramsay runs away from his revolting relatives and makes a new friend with more refined tastes. The second tale, Bashful Bob and Doleful Dorinda, features Bob, who was raised by dogs, and Dorinda, who does housework for relatives who don't like her. It is only when they become friends that they realize they can change their lives for the better. And finally, to get her parents back, Wenda and her woodchuck companion have to outsmart Widow Wallop in Wandering Wenda and Widow Wallop's Wunderground Washery. Young readers will become lifelong fans of Margaret Atwood's work and the kind of wordplay that makes these tales such rich fare, whether they are read aloud or enjoyed independently. These compelling stories of resourceful children are a lively introduction to alliteration.

Margaret Atwood is the author of more than forty books of fiction, poetry and critical essays. Her most recent books include the novel The Heart Goes Last (2015) and a collection of short stories called Stone Mattress: Nine Tales (2014). Forthcoming in 2016 are Hag-Seed, a novel revisitation of Shakespeare's play The Tempest, and Angel Catbird -- featuring a cat-bird superhero -- a graphic novel with co-creator Johnnie Christmas. She is a two-time winner of the Governor General's Award, has won the Man Booker Award and was inducted into Canada's Walk of Fame. Margaret Atwood lives in Toronto with writer Graeme Gibson. Dusan Petricic is the award-winning illustrator of more than twenty books for children. Most recently, he has illustrated Snap! by Hazel Hutchins, Invisibill by Maureen Fergus and My Family Tree and Me, which he also wrote. Mr. Zinger's Hat, written by Cary Fagan, was selected for the 2015 TD Grade One Book Giveaway. A former professor of illustration and book design, Petricic's work appeared for years in the New York Times, Scientific American, the Wall Street Journal and the Toronto Star. He continues to work as a political cartoonist for Politika and to illustrate for American, Canadian and Serbian magazines. He lives in Belgrade and Toronto.
Loading...
or
Not Currently Available for Direct Purchase