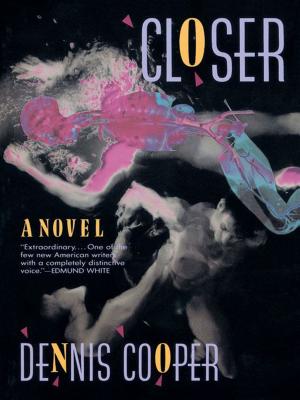 The first novel in the notorious, award-winning George Miles Cycle--"a crowning achievement in American letters from] a master of transgressive fiction" (Tony O'Neill, The Guardian, UK). Proclaimed "the most dangerous writer in America" by the Village Voice, Dennis Cooper began his controversial novel cycle with Closer, introducing readers to the enigmatic George Miles. A physically beautiful and strangely passive teenager, George attracts his fellow students with irresistible mystery, like a wallet lying on the street. One after another, his friends rifle through him searching for love or simply momentary relief from the mindlessness of middle America. George passes through the arms of men like John, an artist who drains his portraits of humanity in order to find what lies beneath; Alex, fascinated by splatter films and pornography; and Steve, who turns his parents' garage into a nightclub. But George remains a tantalizing blur until he's picked up by two men in their forties. Tom and Philippe, obsessed with the beauty of death, believe George to be the perfect object for their passion. Like Jean Genet and William Burroughs, Dennis Cooper assaults the senses as he engages the mind in this "bleak and brilliant" novel that deserves recognition as "(at least) a minor classic" (John Ash, The Washington Post Book World).

Dennis Cooper is the winner of the Ferro-Grumley Award for Closer, and Guide was a Los Angeles Times bestseller and one of its Ten Best Books of the Year. He lives in Los Angeles.
Loading...
or
Not Currently Available for Direct Purchase