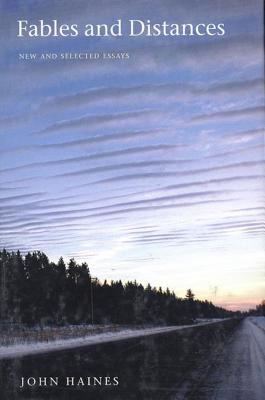 Fables and Distances showcases the full spectrum of the genius of John Haines. Through essays and letters, he reflects on the craft and value of poetry, the arts and their influence in public life, the creative spirit in art and literature, and wilderness and nature. Together, these pieces act as an homage and tribute to this singular force in literature.


Praise For Fables and Distances: New and Selected Essays…

“John Haines is a master writer, as we have known for years. His negotiations with language, in both poetry and prose, have been brilliant. Now this book, in effect his collected essays, reveals more: a range of intelligence and affection such that I cannot imagine any reader being unmoved by them. It is a great and splendid book.” —Hayden Carruth

“Haines writes like someone who has seen a part of the face of God, and who forever after remains both at peace and somewhat stunned.... To read Haines is to enter a clearing in the woods, to feel calmed, and that one was once here, centuries ago.” —Barry Lopez

“If Alaska had not existed, Haines might well have invented it, so much do the observed elements of landscape correspond to a harshly powerful inner mythology. The terrifying fragility of consciousness as it confronts the bare and incommunicable presence of the physical world generates, early and late, a sense of uncanniness and awe, which Haines at his most characteristic transmutes into images of glacial terrain.” —New York Newsday

“John Haines's spare, oracular lyrics feel as if they have come from a great distance. It behooves us to listen to a poet who deepens the silence around us and touches upon an ancient environmental wisdom ... splendidly odd, somberly beautiful.” —Edward Hirsch, The New York Times Book Review

Poet, essayist, and teacher John Haines is the author of The Stars, the Snow, the Fire and The Owl in the Mask of the Dreamer, both published by Graywolf Press. He has received numerous awards, including two Guggenheim Fellowships, a National Endowment for the Arts Fellowship, and the Alaska Governor's Award for Excellence in the Arts. Haines recently received an Academy Award in Literature from the American Academy of Arts and Letters. He currently lives in Alaska.