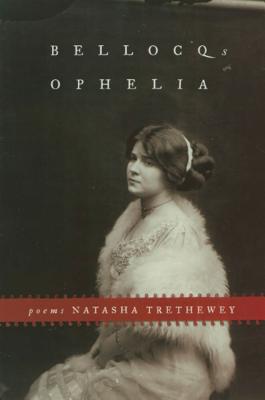 Selected as a "2003 Notable Book" by the American Library Association

In the early 1900s, E.J. Bellocq photographed prostitutes in the red-light district of New Orleans. His remarkable, candid photos inspired Natasha Trethewey to imagine the life of Ophelia, the subject of Bellocq's Ophelia, her stunning second collection of poems. With elegant precision, Ophelia tells of her life on display: her white father whose approval she earns by standing very still; the brothel Madame who tells her to act like a statue while the gentlemen callers choose; and finally the camera, which not only captures her body, but also offers a glimpse into her soul.

“A novella-in-verse that is a pleasure and a revelation to read.” —Garrett Hongo

“This Ophelia, Trethewey's invention, pierces us with lush, tough, elegant poetry, as she yearns to step out of a constricting frame, 'wide-eyed, into life.' Hers--theirs--is a stunning accomplishment.” —Gail Mazur

“Trethewey carries forward the lyric musings on black women's lives that she began in her arresting debut, Domestic Work (2000). Photographs served as inspiration there; here Trethewey fashions a one-woman monologue in response to a famous series of early-twentieth-century photographs taken by E.J. Bellocq in Storyville, New Orleans' red-light district. Portraits of an unnamed light-skinned black woman who stares into the lens with assured defiance galvanized Trethewey, who dubs her Ophelia and allows her to speak. As Ophelia writes eloquently restrained and resolute letters to a favorite teacher and tells the heartbreaking story of her failed search for respectable employment and her rescue from hunger and homelessness by a kind and patient madame, Trethewey creates a persona who belies the implied tragedy of her name by focusing her keen intellect on survival and, ultimately, taking control of the camera and her life. Like Cornelius Eady's Brutal Imagination and Adrienne Rich's lean but commanding poems, Trethewey's spare yet plangent verse portrait illuminates a soul ennobled in her quiet battle with injustice.” —Booklist

Mississippi native Natasha Trethewey is the recipient of the Grolier Poetry Prize and a Pushcart Prize. Her poems have been widely published, and one of them appeared in The Best American Poetry 2000. Her first book, Domestic Work, was the first winner of the Cave Canem Poetry Prize, selected by Rita Dove and published by Graywolf in 2000. Trethewey teaches creative writing at Emory Writing.