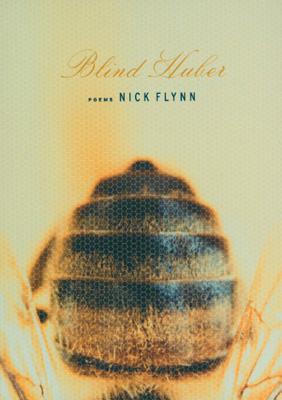 I sit in a body & think of a body, I picture
Burnens' hands, my words
make them move. I say, plunge them into the hive,
& his hands go in.-from "Blind Huber"

Blindness does not deter François Huber-the eighteenth-century beekeeper-in his quest to learn about bees through their behavior. Through an odd, but productive arrangement, Huber's assistant Burnens becomes his eyes, his narrator as he goes about his work. In Nick Flynn's extraordinary new collection, Huber and Burnens speak and so do the bees. The strongest virgin waits silently to kill the other virgins; drones are "made of waiting"; the swarm attempts to protect the queen. It is a cruel existence. Everyone sacrifices for the sweet honey, except the human hand that harvests it all in a single afternoon.

Blind Huber is about the body, love, and devotion and also about the limits of what can be known and what will forever be unknown. Nick Flynn's bees and keepers-sometimes in a state of magnificent pollen-drunk dizziness-view the world from a striking and daring perspective.

“Flynn is unquestionably one of the most interesting poets writing today, and avid poetry readers should be lining up for this book.” —Library Journal

“Contemplative and empathic, Flynn discerns the essence of complex sensory and emotional states, writing with a light but commanding touch in poems that are at once airy and tensile. In his ravishing and award-winning debut, Some Ether (2000), he portrayed a boy coping with his young mother's suicide. Here, in a radical departure, Flynn imaginatively enters the rarefied existence of a French eighteenth-century beekeeper named Francois Huber, who, in spite of going blind during childhood, conducted groundbreaking studies of the hidden dynamics of hive life with the help of an assistant remembered only as Burnens. As fascinated by the bees' points of view as by Huber's phenomenal ability to divine their ways through sound, touch, and smell, Flynn writes with exquisite delicacy and transporting agility not only of the blind apiarist's vivid perceptions but also of the experiences of drones, workers, and queens. Spellbound within wax edifices beneath a honey rain, Flynn succinctly and resonantly contrasts the dense and thrumming bee realm with our own buzzing, bittersweet world of avid appetites and aggression, longing and valor.” —Donna Seaman, Booklist

“This is a work of the creative imagination unlike any other.” —Stanley Kunitz