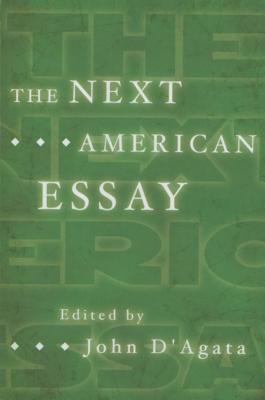 The Next American Essay (A New History of the Essay)

In The Next American Essay, John D'Agata takes a literary tour of lyric essays written by the masters of the craft. Beginning with 1975 and John McPhee's ingenious piece, "The Search for Marvin Gardens," D'Agata selects an example of creative nonfiction for each subsequent year. These essays are unrestrained, elusive, explosive, mysterious—a personal lingual playground. They encompass and illuminate culture, myth, history, romance, and sex. Each essay is a world of its own, a world so distinctive it resists definition.

“From the living Monopoly game (in an essay by John McPhee) to a set of unattended ghostly footnotes, from the Joan Didion elegy to the Anne Carson fantasia, this book shows what the essay is and what, with any luck, it will be. The collection is full of pleasures and surprises, the most stunning of which is the ongoing essay by D'Agata himself--he transforms a mere anthology into the living biography of an art form.” —Michael Silverblatt, creator, producer, and host of public radio's "Bookworm"

“D'Agata avows love of the diversity of the essay form, and it is palpable on every page of this unique, esoteric, beautiful book. He tells the reader that he first became enamored of essays when his mother read him the news of the day while he was still in her womb. It is this kind of fantastic, myth-making perspective that runs through each entry of this anthology, whose contributors include such master essayists as John McPhee, Susan Sontag, Joan Didion and Annie Dillard. Hopping from one genre to another--biography, poetry, philosophy, travel writing, memoir--D'Agata makes the point that the essay is not just one form of writing but can be every form of writing . . . [Many of D'Agata's] choices convey the wondrously infinite possibilities of the essay form. Standouts include 'Unguided Tour,' Sontag's cranky philosophical dialogue with her inner self; 'Life Story,' David Shields's string of aphorisms composed entirely of bumper sticker slogans; 'Ticket to the Fair,' David Foster Wallace's colorful, compassionate tour of the Illinois State Fair; and 'The Body,' Jenny Boully's postmodern pastiche of autobiographical (or not) footnotes. D'Agata's idea of an essay--or lyric essay, as he comes to call these writings--conflates both art and fact, blurring the line between objectivity and subjectivity. The lyric essay, he says, has a 'kind of logic that wants to sing.' Readers, listen up, then: here is a book that makes some beautiful music.” —Publishers Weekly

John D'Agata is the author Halls of Fame. A graduate of the Iowa Writers' Workshop, he holds M.F.A.s in both nonfiction and poetry and is currently editor of lyric essays for Seneca Review.