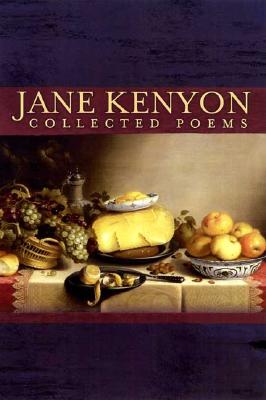 Jane Kenyon is considered one of America's best contemporary poets. Her previous collection, Otherwise: New & Selected Poems, published just after her death in 1995, has been a favorite among readers, with over 60,000 copies in print, and is a contemporary classic.

Now at the ten-year anniversary of her death, Kenyon's Collected Poems assembles all of her published poetry in one book. Included here are the complete poems found in her four previous volumes--"From Room to Room," "The Boat of Quiet Hours," "Let Evening Come," and "Constance"--as well as the poems that appear in her posthumous volumes "Otherwise" and "A Hundred White Daffodils," four poems never before published in book form, and her translations in "Twenty Poems of Anna Akhmatova.

Jane Kenyon is the author of "Otherwise: New & Selected Poems" and A" Hundred White Daffodils." She lived with her husband, Donald Hall, in Wilmot, New Hampshire, until her death in 1995.

“Her words, with their quiet, rapt force, their pensiveness and wit, come to us from natural speech, from the Bible and hymns, from which she derived the singular psalmlike music that is hers alone.” —New York Times Book Review

“Few poets are as flawlessly down-to-earth as Kenyon: her progress is natural, not affected or rushed. The volume is more than an opus; it is the documentary, the testimony, of a rich human life.” —Boston Book Review

“This book chronicles the uncertainty of living as culpable, temporary creatures, and catalogues ‘anger, the inner/arsonist’ as well as triumph. We have lost Kenyon, but ‘God does not leave us/comfortless, so let evening come’; Otherwise is proof of that.” —The Nation

“Kenyon’s poetry is honest and earnest, rich in imagery yet free of clutter. This collection is generous, cohesive and moving.” —Publishers Weekly, starred review

“One may also read these precise and limpid works simply for the beauty of their expression, for their insight into the life of a woman prey to depression, obsessed with absence and death, and highly reliant on the natural world as a source of consolation. These are poems of extreme tenderness. . . . In a just world, Otherwise—beautifully designed by Graywolf--would become a bestseller.” —Washington Post Book World