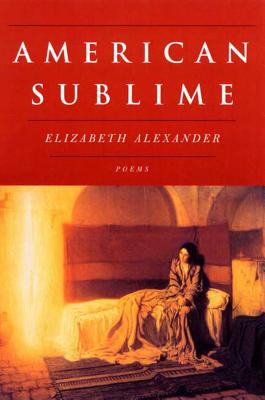 A brilliant new collection by Elizabeth Alexander, whose "poems bristle with the irresistible quality of a world seen fresh" (Rita Dove, The Washington Post)

Too many people have seen too much
and lived to tell, or not tell, or tell
with their silent, patterned bodies,
their glass eyes, gone legs, flower-printed flesh . . .
-from "Notes From"

In her fourth remarkable collection, Elizabeth Alexander voices the outcries, dreams, and histories of an African American tradition that goes back to the slave rebellion on the Amistad and to the artists' canvases of nineteenth-century America. In persona poems, historical narratives, jazz riffs, sonnets, elegies, and a sequence of ars poetica, American Sublime is Alexander's most vivid and varied collection and affirms her place as one of America's most lively and gifted writers.

"Alexander is an unusual thing, a sensualist of history, a romanticist of race. She weaves biography, history, experience, pop culture and dream. Her poems make the public and private dance together." --Chicago Tribune

“Elizabeth Alexander is an inspired choice for this historic role. She is a marvelous poet, an incisive and influential scholar, and one of the great citizens of the literary world. What a joy it will be to see her and hear her at that podium on that day!”—Alice Quinn, in response to Barack Obama’s choice of Elizabeth Alexander for the role of inaugural poet

“Alexander has deepened her voice and craft…exhibiting a lyric felicity and growing warmer as she makes ample use of irony.”—Star Tribune

Elizabeth Alexander is the author of three other poetry collections, most recently Antebellum Dream Book, as well as a collection of essays, The Black Interior.