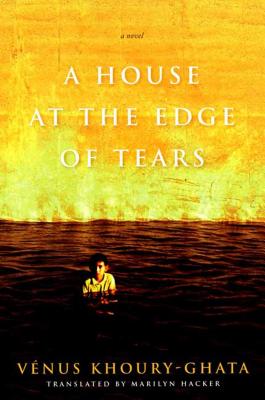 A House at the Edge of Tears (Paperback)

In the city of Beirut, five shabby dwellings circle a courtyard with a pomegranate tree weeping blood red fruit. The residents hear screams in the night as a boy is tossed out into the street by his father—a punishment for masturbating in his sleep. A crime not worthy of the punishment: the neighbors gossip and decide that he must have tried to rape his sisters. "Small-boned with long, silky lashes, no one but the devil could camouflage evil so seductively." The poems he writes are perhaps an even greater crime to his father, but ultimately a gift to his eldest sister, who narrates their story with a combination of brutal truth and stunning prose. As her brother becomes more and more lost to his family and to himself, we also learn of a Contessa who teaches tango, a family who spends every Sunday in search of buried treasure, and the miracle of a weeping Madonna statue that cries when human tears run dry.

In the harrowing and mesmerizing novel A House at the Edge of Tears, celebrated novelist and poet, Khoury-Ghata, presents the disintegration of a family and a country—both ruled by a fury fueled by fear.

Vénus Khoury-Ghata's She Says, which was also translated by Marilyn Hacker, was recently published in the United States a named a finalist for the National Book Critics Circle Award for Poetry.

What kind of city is Khoury-Ghata’s Beirut? How does multicultural­ism shape its social structure and citizens’ identities? How do the locals view foreigners? What is the role of Westernization, and does it affect the city dwellers’ values, actions, and lives?

The main character is interested in beauty and the arts; beauty queens, the tango, poetry. How important are appearances? Is beauty in integral part of the village life? Why does the main character enter beauty contests?

Discuss the book’s maternal figures. Are there similarities between the narrator’s mother and the weeping Madonna? Does inaction in the face of a tyrannical husband make this mother a martyr or, as the brother suggests, a tacit conspirator? How responsible are parents for their children’s fates?

The narrator tells her brother that she wrote “with your pen, on the page that you hadn’t been able to fill.” How much of this book was written for her brother? For whom else does she speak? Why would the narrator choose to write such a book?

From the pulpy red pomegranate tree to the stained sheets at Renee’s childbirth, Khoury-Ghata frequently uses the imagery of blood. Are the bloody scenes related? How do blood’s traditional connotations— violence, passion, and family lineage, for instance—interact with Khoury-Ghata’s discussion of it? How does the brother’s “blood disease,” or heroin addiction, connect to this theme?

Is the father’s “curse of the monastery” fulfilled? Does religion “curse” or empower characters that believe? Could the Vinikoffs’ hunt for treasure be read as a leap of faith, since they cannot be certain that the treasure truly exists? Are we to admire or pity the Vinikoffs’ efforts?

The main characters in this book are required to speak formal French instead of street French or Arabic. Do literacy and multilingualism alienate them from their community? Does it help them? The narrator’s brother’s relationship with language changes over the course of time:  What is the relevance of his linguistic degenration?  How do the boy’s rebellion and illness affect the family’s views on literature and education?

The narrator frequently moves from Beirut to a small village in the countryside. How does this change the narrator?