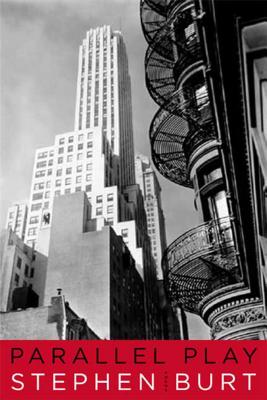 Flaunting your useless knowledge has failed you again,
Though it was all they had taught you.
—from "Like a Wreck"

Consult any childhood development guide and you'll find the term "parallel play": when children under two are placed together, they'll play separately but won't interact. They are more fascinated with their immediate surroundings than with each other.

Stephen Burt's second collection of poems, Parallel Play, describes lovers, friends, travelers, and revelers attempting lives dependent on each other but still pulled inevitably into preoccupations of their own self-awareness. When there are many obstacles—overeducation, narcissism, extended adolescence, nomadic existence—how can Americans crawl out of the nursery and coexist if they increasingly have to learn to do so as adults?

Stephen Burt is the author of a previous poetry collection, Popular Music, and
a work of literary criticism, Randall Jarrell and His Age. He currently teaches at Macalester College and lives in Saint Paul, Minnesota.

“Stephen Burt has found a courage I'd never imagined until I read these poems. It is the courage to expound the consolations of Terror, to declare that we are the Ancients of ourselves, already more accustomed than we know to life in the ruins. With Parallel Play, Burt becomes the Cavafy of these former United States. It will be a privilege to await the barbarians in his good company.” —Donald Revell
or
Not Currently Available for Direct Purchase
Copyright © 2020 American Booksellers Association