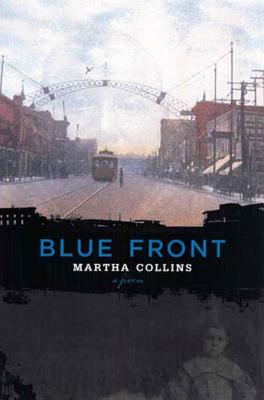 A stunning account of racism, mob violence, and cultural responsibility as rendered by the poet Martha Collins

the victim hanged, though not on a tree, this
was not the country, they used a steel arch
with electric lights, and later a lamppost, this
was a modern event, the trees were not involved.
—from "Blue Front"

Martha Collins's father, as a five-year-old, sold fruit outside the Blue Front Restaurant in Cairo, Illinois, in 1909. What he witnessed there, with 10,000 participants, is shocking.

In Blue Front, Collins describes the brutal lynching of a black man and, as an afterthought, a white man, both of them left to the mercilessness of the spectators. The poems patch together an arresting array of evidence—newspaper articles, census data, legal history, postcards, photographs, and Collins's speculations
about her father's own experience. The resulting work, part lyric and part narrative, is a bold investigation into hate, mob mentality, culpability, and what it means to be white in a country still haunted by its violently racist history.

“I admire everything Martha Collins has written, and I feel she was born to write this book. I want to quietly thank her, and to quietly thank those to whose memory she dedicates this great work.” —Jean Valentine

Martha Collins is the author of four previous poetry collections, including Some Things Words Can Do, and co-translator of two volumes of poetry from the Vietnamese. She teaches at Oberlin College and lives in Oberlin, Ohio, and Cambridge, Massachusetts.