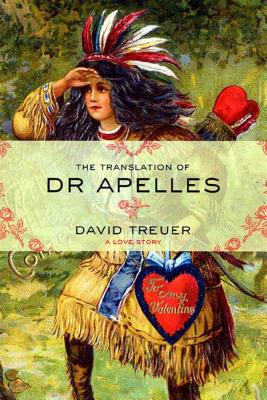 The Translation of Dr Apelles

He realizes he has discovered a document that could change his life forever.

Dr Apelles, Native American translator of Native American texts, lives a diligent existence. He works at a library and, in his free time, works on his translations. Without his realizing it, his world has become small. One day he stumbles across an ancient manuscript only he can translate. What begins as a startling discovery quickly becomes a vital quest—not only to translate the document but to find love. Through the riddle of Dr Apelles's heart, The Translation of Dr Apelles explores the boundaries of human emotion, charts the power of the language to both imprison and liberate, and maps the true dimensions of the Native American experience. As Dr Apelles's quest nears its surprising conclusion, the novel asks the reader to speculate on whose power is greater: The imaginer or the imagined? The lover or the beloved?

In this brilliant mystery of letters in the tradition of Calvino, Borges, and Saramago, David Treuer excavates the persistent myths that belittle the contemporary Native American experience and lays bare the terrible power of the imagination.


Praise For The Translation of Dr Apelles: A Love Story…

“[David Treuer] is mounting a challenge to the whole idea of Indian identity as depicted by both Native and white writers.” —New York Times

“In David Treuer's deeply crafty, shape-shifting third novel, The Translation of Dr Apelles he echoes Virgil….He seems to want to do for Native American culture and literature what James Joyce did for the Irish: haul it into the mainstream of Western culture through sheer nerve and verve.” —Washington Post Book World

“Treuer's edgy romance celebrates our love for each other, love for the earth and love of story, the way we make sense of life in all its wildness.” —Los Angeles Times

“[The Translation of Dr Apelles is] a novel that is so intellectually rigorous and emotionally stirring, we've already told everyone who will listen to read it. And now, we're telling you.” —Time Out Chicago

“A myriad of false documents, questionable authorships, stalled sexual encounters, and narrative disjunctions, Dr. Apelles is not to be mistaken, like the books that take the most heat in Treuer's essays, for an anthropological project. To the contrary, Treuer pushes the metatextual games of writers like J.M. Coetzee and A.S. Byatt past the point of parody.” —Village Voice

“Treuer is truly an original voice.” —The San Francisco Chronicle

DAVID TREUER is Ojibwe from the Leech Lake Reservation in northern Minnesota. He is the award-winning author of the novels, Little and The Hiawatha. He teaches literature and creative writing at the University of Minnesota.
Loading...
or
Not Currently Available for Direct Purchase