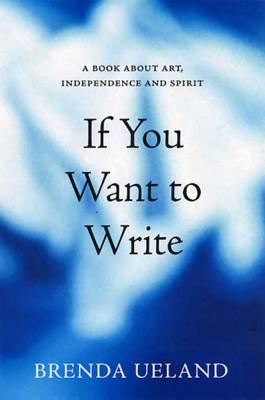 If You Want to Write (Paperback)

A Book about Art, Independence and Spirit

But we must try to find our True Conscience, our True Self, the very Center, for this is the only first-rate choice-making center. Here lies all originality, talent, honor, truthfulness, courage and cheerfulness. Here lies the ability to choose the good and the grand, the true and the beautiful.

In her ninety-three remarkable years, Brenda Ueland published six million words. She said she had two rules she followed absolutely: to tell the truth, and not to do anything she didn't want to do. Her integrity shines throughout If You Want to Write, her bestselling classic on the process of writing that has already inspired
thousands to find their own creative center. Carl Sandburg called this book "the best book ever written about how to write." Yet Ueland reminds us that "whenever I say ‘writing' in this book, I also mean anything that you love and want to do or make."

BRENDA UELAND (1891–1985) spent many years living in New York, where she was part of the Greenwich Village bohemian crowd. She received an international swimming record for over-eighty-year-olds and was knighted by the King of Norway.

Andrei Codrescu, who lived in socialist Romania until the age of nineteen, is a commentator on NPR's All Things Considered. A professor of literature at Louisiana State University, he lives in New Orleans.

Praise For If You Want to Write: A Book about Art, Independence and Spirit…

“I was with [Ueland] right up to the end and wanted to shout, ‘Amen.'” —Andrei Codrescu, NPR

“I only have to read a few sentences and I am infected with the desire to follow her.” —The Women's Review of Books