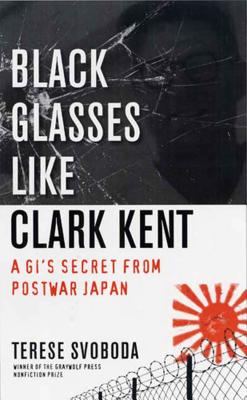 A GI's Secret from Postwar Japan

After her Uncle's suicide, Terese Svoboda investigates his stunning claim that MPs may have executed their own men during the occupation of Japan after World war II

[Our captain] commended us for being good soldiers and doing our job well and having a minimum of problems. Then he dropped a bomb. He said the prison was getting overcrowded, terribly overcrowded.

As a child Terese Svoboda thought of her uncle as Superman, with "Black Clark Kent glasses, grapefruit-sized biceps." At eighty, he could still boast a washboard stomach, but in March 2004, he became seriously depressed. Svoboda investigates his terrifying story of what happened during his time as an MP, interviewing dozens of elderly ex-GIs and visiting Japan to try to discover the truth.

In Black Glasses Like Clark Kent, winner of the Graywolf Nonfiction Prize, Svoboda offers a striking and carefully wrought personal account of an often painful search for information. She intersperses excerpts of her uncle's recordings and letters to his wife with her own research, and shows how the vagaries of military justice can allow the worst to happen and then be buried by time and protocol

Terese Svoboda has published nine books of prose and poetry, most recently Tin God, and her writing has been featured in The New Yorker, The New York Times, The Atlantic Monthly, and The Paris Review. She lives in New York.

Praise For Black Glasses Like Clark Kent: A GI's Secret from Postwar Japan…

“A sense of urgency pervades all of [Svoboda's] work, giving the words a pulse, making her language race with insistence.” —Poets & Writers
or
Not Currently Available for Direct Purchase
Copyright © 2020 American Booksellers Association