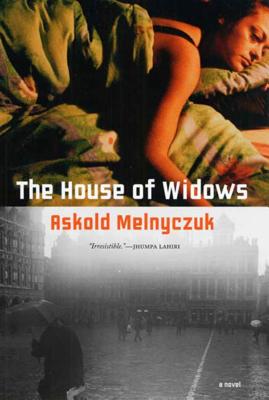 The House of Widows

A novel of intrigue that is played across decades, continents, and generations by the celebrated, New York Times Notable author of Ambassador of the Dead

Late one night, a week after Father's suicide, I finished sweeping the bulk of my inheritance into four giant trash bags, and heaved them into the Dumpster at the construction site around the corner from his apartment. Then I sat down at the two-person coffee table in the middle of his kitchen, the fluorescent light loud as cicadas, and examined the three
things I'd kept.

The three things that James kept are his father's British military uniform, an oversize glass jar, and a letter written in a language he can't read. They become the keys to unlocking the door on a past James never imagined while growing up amid the security of Boston's north shore, and they send him on an odyssey across England, Austria, and Ukraine. Along the way, he meets his dying aunt Vera, the matriarch of a mysterious branch of the family. His mission puts him face-to-face with the international sex trade, a displaced Palestinian girl with streaked pink hair and attitude to spare, and a violent world in which he is ultimately implicated. From old America, new Europe, and the timeless Middle East, James learns what it means to live in the webbed world of the twenty-first century.

In The House of Widows, Askold Melnyczuk offers a searing exploration of the individual's role in the inexorable assault of history.

Askold Melnyczuk is the director of creative writing at the University of Massachusetts, Boston. He is the author of two other novels, What Is Told and Ambassador of the Dead. He also teaches in the Graduate Writing Seminars at Bennington College.