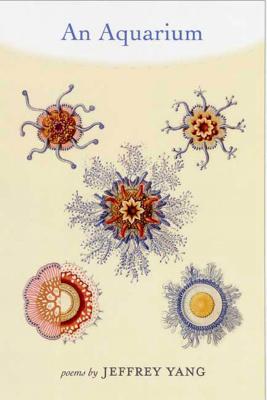 From "Abalone" to "Zooxanthellae," Jeffrey Yang's debut poetry collection An Aquarium is full of the exhilarating colors and ominous forms of aquatic life. But deeper under the surface are his observations on war, environmental degradation, language, and history, as a father—troubled by violence and human mismanagement of the world—offers advice to a newborn son.


Praise For An Aquarium: Poems…

“If you ever need to remember that we live in outer space and all that it implies, go look into an aquarium. Or read this fabulous book that wraps eco-history into alphabet and weapon development and marine movement and actually proves that they are cooperating in the construction of the monster planet that we inhabit. Thrilling, scientific, mystical, clear, hilarious, horrible--an ‘aquarium' in all its complexity: this very book.” —FANNY HOWE

“Jeffrey Yang's witty, glitzy, erudite, and musical icthyographic extravaganza is the best bestiary since Lawrence and the snazziest first book in years. A starfish is born!” —ELIOT WEINBERGER

Jeffrey Yang is a poet, translator, and editor at New Directions Publishing Corp. He is the translator of East Slope by Su Shi, and his poetry has appeared in The Nation, Tin House, and elsewhere. He lives in Beacon, New York.