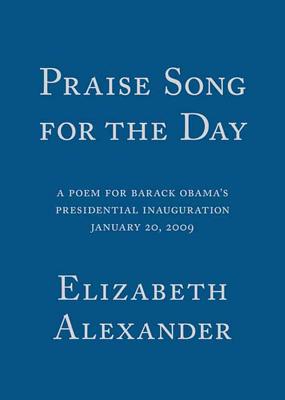 On January 20, 2009, Elizabeth Alexander served as the fourth ever inaugural poet and a central participant in one of the most closely watched inaugurations in American history. Selected by Barack Obama, Alexander composed and delivered her original poem "Praise Song for the Day" to an audience of millions, and now the poem can be read and savored for posterity. Printed on heavy, uncoated stock, with French flaps, and a silver foil stamp, this collectible chapbook is a cherished reminder of this monumental presidential event.


Praise For Praise Song for the Day: A Poem for Barack Obama's Presidential Inauguration, January 20, 2009…

“Elizabeth Alexander is an inspired choice for this historic role. She is a marvelous poet, an incisive and influential scholar, and one of the great citizens of the literary world. What a joy it will be to see her and hear her at that podium on that day!” —Alice Quinn

“Elizabeth Alexander is a superb choice for the Obama Inauguration. She is from Washington, she represents Obama's generation, and she has written about the civil rights conflict and other historical events that have shaped the character of this country . . . At the same time, her intense personal vision reveals the commonplace life illuminated from startling new angles--as good poetry always does.” —Tree Swenson, Director of the Academy of American Poets