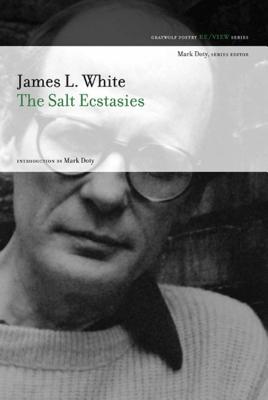 James L. White's The Salt Ecstasies—originally published in 1982, shortly after White's untimely death—has earned a reputation for its artful and explicit expression of love and desire. In this new edition, with an introduction by Mark Doty and previously unpublished works by White, his invaluable poetry is again available—clear, passionate, and hard-earned.

The Salt Ecstasies is a new book in the Graywolf Poetry Re/View Series, edited by Doty, dedicated to bringing essential books of contemporary American poetry back into print.


Praise For The Salt Ecstasies: Poems…

“White's was a crucial voice to encounter, for what it confirmed as possible--longing, homosexual longing, the expression of that longing in a poem. I think it's arguable that Dante's Inferno is better literature, but Dante couldn't have given me what White did.” —CARL PHILLIPS, from Coin of the Realm: Essays on the Life and Art of Poetry

James L. White was born in 1936. He was the author of four poetry collections. He lived for many years in Minneapolis, until his death in 1981.
Loading...
or
Not Currently Available for Direct Purchase