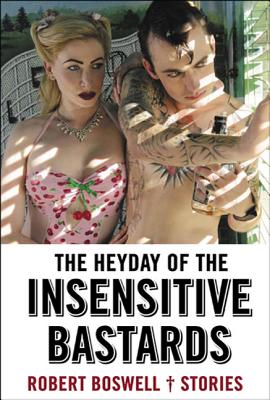 Heyday of the Insensitive Bastards is an exhilarating collection, as brash as it is wise, by Robert Boswell one of our great storytellers

Set mainly in small, gritty American cities, each of these stories is a world unto itself. A man's obsessive visits to a fortuneteller leave him nearly homeless. Time collapses as two marriages slowly dissolve. And in the searing title story, a young man recounts the summer he spent in a mountain town, squatting in a borrowed house with a loose band of slackers, abstaining from all drugs (other than mushrooms)—and ultimately asking just what kind of harm we can do to one another.

“Like Richard Yates, Robert Boswell seems always to wish he had better news for us. In the wide-ranging stories of The Heyday of the Insensitive Bastards, he wishes we weren't so lost, so conflicted, so stubborn in our misapprehensions. But he's been watching us too closely, with too clear an eye, too keen an intelligence, and besides, Boswell's real talent, like Yates's, is for telling us the truth.” —RICHARD RUSSO

“[Boswell] shows a sensitive and comprehensive understanding of the quirks that can shake a person off course: from fear, passivity and pride to external knocks and dings that are easier to spot, harder to fix.” —The New York Times Book Review