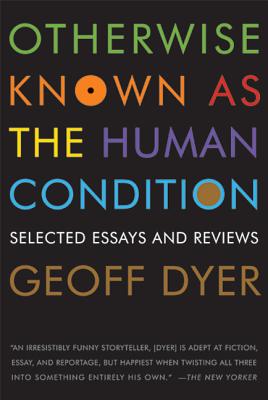 Otherwise Known as the Human Condition

Geoff Dyer has earned the devotion of passionate fans on both sides of the Atlantic through his wildly inventive, romantic novels as well as several brilliant, uncategorizable works of nonfiction. All the while he has been writing some of the wittiest, most incisive criticism we have on an astonishing array of subjects—music, literature, photography, and travel journalism—that, in Dyer's expert hands, becomes a kind of irresistible self-reportage.

Otherwise Known as the Human Condition collects twenty-five years of essays, reviews, and misadventures. Here he is pursuing the shadow of Camus in Algeria and remembering life on the dole in Brixton in the 1980s; reflecting on Richard Avedon and Ruth Orkin, on the status of jazz and the wonderous Nusrat Fateh Ali Khan, on the sculptor ZadKine and the saxophonist David Murray (in the same essay), on his heroes Rebecca West and Ryszard Kapus´cin´ski, on haute couture and sex in hotels. Whatever he writes about, his responses never fail to surprise. For Dyer there is no division between the reflective work of the critic and the novelist's commitment to lived experience: they are mutually illuminating ways to sharpen our perceptions. His is the rare body of work that manages to both frame our world and enlarge it.


Praise For Otherwise Known as the Human Condition: Selected Essays and Reviews…

“Mr. Dyer's new book, Otherwise Known as the Human Condition, is a collection of his occasional prose. . . . They're 'bits and bobs,' he writes, but he takes them more seriously than that, and so should anyone who cares about joyous, wriggling sentences composed in the English language.” —Dwight Garner, The New York Times

“There's a restless current to these essays, as if a net were being thrown ever wider in search of fresh versions of that original burst of aesthetic delight, literature, which managed to turn a working-class grammar school boy from Cheltenham into an international 'man of letters.' . . . This is what I find most remarkable about Dyer: his tone. Its simplicity, its classlessness, its accessibility and yet its erudition--the combination is a trick few British writers ever pull off. . . . [Dyer's humor is] what separates him from Berger and Lawrence and Sontag: it's what makes these essays not just an education, but a joy.” —Zadie Smith, Harper's Magazine

“You read Dyer for his caustic wit, of course, his exquisite and perceptive crankiness, and his deep and exciting intellectual connections, but from these enthralling rants and cultural investigations there finally emerges another Dyer, a generous seeker of human feeling and experience, a man perhaps closer than he thinks to what he believes his hero Camus achieved: 'a heart free of bitterness.'” —Sam Lipsyte, Very Short List

“Dyer's writing does what the best critical writing always does, encouraging us to view, read, or listen closely to art, literature, and music as well as to pay close attention to various cultural forms and their impact on our personal lives.” —Publishers Weekly (starred review)

“All of Dyer's work holds together very well indeed, but what holds it together is a voice, which becomes a persona. It's a very English, low-key, plainspoken, unassuming voice that invites you in, and can become intimate but not too intimate, and can smoothly transit between comedy and gravity. It takes on flesh in his reported pieces and personal essays and some of his fiction, and there it is often richly and sometimes darkly comic--self deprecating, stubborn, canny, forlorn, worldly, hapless, serious, romantic, dissipated.” —Luc Sante, Bookforum

“While contemporary writers such as David Shields decry the need to erase the lines between fiction and nonfiction, for years, Dyer has been exemplar, churning out smart essays with his own cocktail of fact and fiction, private and public, myth and truth and has proven that rigorous criticism and writing arises out of more than just an esoteric bookshelf. Good writing, it appears, begins with seeking what moves us.” —Bookslut

“[These are] brilliantly witty, surprising essays.” —The Daily Beast

“Geoff Dyer has won several prizes, all deserved. When you read accounts of Dyer's work you'll find praiseful critics comparing him to vast numbers of writers, hurling their comparisons into the useless heap that follows him everywhere he goes. I myself often think of G.K. Chesterton for the constant and dazzling flow of paradoxes in his prose.” —Jonathan Lethem, BOMB

“The essay collection 'is considered a pretty low form of book,' in Dyer's estimation, and yet Otherwise Known may be Dyer's masterpiece: a living journal documenting the wealth of his interests, the depth of his insights, and a stealthily powerful argument for the essay, not the novel, as the richest mode of contemporary letters. . . . And let us be thankful that this polymath chose to ignore his father's own words of wisdom: 'Never put anything in writing.'” —The Boston Globe

“Again and again, Dyer pairs an uncommonly precise description of what a particular artist does with an equally compelling, unexpected reason for why it is important. There are few more valuable things that a critics can accomplish in a review, . . . and Dyer's mastery of them is a testament to his achievement.” —The Barnes & Noble Review