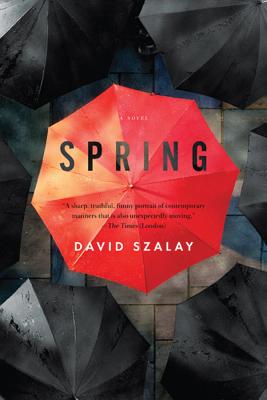 James is a man with a checkered past—sporadic entrepreneur, one-time film producer, almost a dot-com millionaire—now alone in a flat in Bloomsbury, running a shady horse-racing-tips operation. Katherine is a manager at a luxury hotel, a job she'd intended to leave years ago, and is separated from her husband. The novel unfolds in 2006, at the end of the money-for-nothing years, as a chance meeting leads to an awkward tryst and James tries to make sense of a relationship where "no" means "maybe" and a "yes" can never be taken for granted.

David Szalay builds a novel of immense resonance as he cycles though perspectives that add layers of depth to the hesitations, missteps, and tensions as James tries to win Katherine. James's other pursuit is money, and Spring follows his investments and schemes, from a half share in a thoroughbred to a suit-and-tie day job he's taken to pay the bills. Spring is a sharply tuned novel so nuanced and precise in its psychology that it establishes Szalay as a major talent.

David Szalay was born in Canada in 1974. His first novel, London and the South-East, won the Betty Trask Prize and the Geoffrey Faber Memorial Prize. His second novel, The Innocent, was published by Jonathan Cape in 2009. He lives in London.

Praise For Spring: A Novel…

“Plenty of novelists have captivated readers with stories of passionate new relationships full of romance, optimism, and hot sex. In Spring, David Szalay pulls off a much harder trick, writing engrossingly about new lovers who manage to go straight to irritation, pessimism and pain. . . . This might be pretty bleak stuff if Szalay were not such a lyrical, precise writer, deftly capturing the hyperawareness that often stands in for real communication between couples. This awkward dance may be anything but dreamy, but it's irresistible to watch.” —O, The Oprah Magazine

“[Szalay] doesn't shy away from anything, including awkward sex, in his vivisection of this unpromising affair. The result is an intense portrait of the challenging complexity of really connecting with someone.” —Barnes & Noble Review

“Szalay is anything but traditional in his approach to romance. . . . [He] has a modern, understated voice and a gift for writing bursts of funny, yet still sharp, dialogue.” —Shelf Awareness

“[A] nuanced and bracingly intelligent dissection of contemporary London life. . . . Szalay provides a sharp and occasionally humorous portrait not only of [James and Katherine] but of the mores of 21st-century romance among those for whom romance has had its old glamour grubbed up a bit by age, world-weariness and the demands of everyday life. Subtle in its psychology, elegantly written, with lively and amusing minor characters--an impressive novel.” —Kirkus Reviews

“In Spring the gifted writer David Szalay explores the complex worlds of love and money, each with their surprises and vicissitudes. This novel made me feel in the best way that I was eavesdropping on a series of fascinating conversations. An insightful portrait of contemporary England.” —Margot Livesey

“Szalay's insights into the perspectives of both sexes illuminate the complexity and fragility of romantic coupling. His knowing eye and exacting prose . . . bring perspicacity to the complications of love.” —Publishers Weekly

“[Szalay] gets to the heart of what it means to encounter disappointment and heartache. His characters . . . are skilled in picking up the pieces of their broken lives and moving on to something better, however elusive better may prove to be.” —Booklist

“Closely and elegantly observed. . . . Szalay seems to taunt the reader with his near-virtuosic range and his subtle comic touch.” —The National Post (Canada)