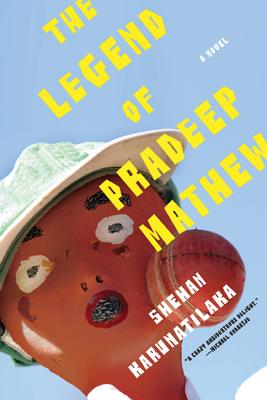 The Legend of Pradeep Mathew

Winner of the Commonwealth Book Prize

"A crazy ambidextrous delight. A drunk and totally unreliable narrator runs alongside the reader insisting him or her into the great fictional possibilities of cricket."--Michael Ondaatje

Aging sportswriter W.G. Karunasena's liver is shot. Years of drinking have seen to that. As his health fades, he embarks with his friend Ari on a madcap search for legendary cricket bowler Pradeep Mathew. En route they discover a mysterious six-fingered coach, a Tamil Tiger warlord, and startling truths about their beloved sport and country. A prizewinner in Sri Lanka, and a sensation in India and Britain, The Legend of Pradeep Mathew by Shehan Karunatilaka is a nimble and original debut that blends cricket and the history of modern Sri Lanka into a vivid and comedic swirl.


Praise For The Legend of Pradeep Mathew: A Novel…

“Karunatilaka's rambunctious debut brims with inventive ideas and comic set-pieces. . . . Cricket aficionados will love The Legend of Pradeep Mathew, but Karunatilaka has stuffed his novel so full of life--albeit a crazily inflated version of it--for it to charm and dazzle the rest of us in equal measure.” —Star Tribune (Minneapolis)

“Endearing . . . disguised as a sports story yet it's really about a man's love and disgust for his country.” —Houston Chronicle

“In pursuing the true-or-false legend of a cricketer named Pradeep Mathew, Shehan Karunatilaka brings forth meditations on corruption, politics, terrorism, and colonialism as well as match-fixing and ball-tampering in cricket-obsessed Sri Lanka.” —World Literature Today

Shehan Karunatilaka lives and works in Singapore. He has written advertisements, rock songs, travel stories, and basslines. This is his first novel.
Loading...
or
Not Currently Available for Direct Purchase