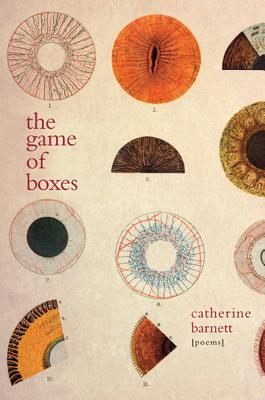 The Game of Boxes

*Winner of the 2012 James Laughlin Award*


The second collection by Catherine Barnett, whose "poems are scrupulously restrained and beautifully made" (Edward Hirsch, The Washington Post)


Praise For The Game of Boxes: Poems…

“Though the poems in the long-awaited second collection from Barnett are only a handful of lines each, they are deceptively sophisticated. . . . Barnett's emotions are so potent they become something you could choke on: 'He's a lozenge of smut,' she writes, with the acute, straightforward vulnerability that makes these poems brave.” —Publishers Weekly, starred review

“[Barnett] negotiates the varied paths of love and, with a wry eye, looks for the meaning of life lurking in every corner. . . . Barnett plays the game of Hangman backwards, removing everything but the essential and surprising us with rhyme, turn of phrase and idea and image. . . . Highly recommended.” —Library Journal

“Short and tight, all of Barnett's poems are purposeful--and often powerful. The Game of Boxes is a book the reader will want to return to after the first perusal, as the carefully chosen language, imagery, and intent of each poem may open up more broadly with subsequent glances.” —Shelf Awareness for Readers

“These utterly clear lyrics start in the quotidian and then unpredictably take a sudden half-turn into another world--mythological, metaphorical, fantastic--and in so doing assume a crystalline other dimension. They refresh, clarify, and invigorate the mind--a pleasure to read.” —Lydia Davis

“These heart-breaking poems of an all too human life stay as absolute as the determined craft which made them. There is finally neither irony nor simple despair in what they record. Rather, it is the far deeper response of witness, of recognizing what must be acknowledged and of having the courage and the care to say so.” —Robert Creeley

Catherine Barnett is the author of a previous poetry book, Into Perfect Spheres Such Holes Are Pierced. She has received a Whiting Writer's Award and a Guggenheim Fellowship. She lives in New York City.
Loading...
or
Not Currently Available for Direct Purchase