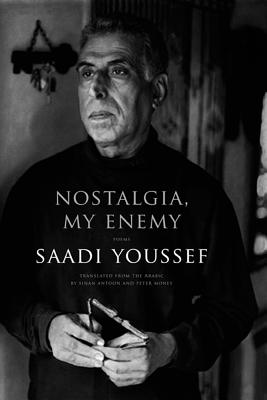 New poetry by Iraqi poet Saadi Youssef, one of the major voices from the Arab world

The country we love was finished
before it was even born.
The country we did not love has claimed
the blood left in our veins.
—from "A Desperate Poem"

Nostalgia, My Enemy collects some of the best of Saadi Youssef's most recent poems from the last decade, since the ongoing American-led war in his home country of Iraq. In direct, penetrating language, translated from the original Arabic by Sinan Antoon and Peter Money, Youssef's poems dwell on the casualties of the war, the loss of his country, the role of the writer in exile, the atrocities of Saddam Hussein, and the inhumane acts perpetrated by American military at Abu Ghraib. What emerges is the powerful voice of a writer for whom "Poetry transforms in that intimate moment which combines the current and the eternal in a wondrous embrace."


Praise For Nostalgia, My Enemy: Poems…

“Saadi Youssef was born in Iraq, but he has become, through the vicissitudes of history and the cosmopolitan appetites of his mind, a poet, not only of the Arab world, but of the human universe.” —Marilyn Hacker

Saadi Youssef was born in 1934 in Basra, Iraq. He has published more than thirty volumes of poetry and is considered one of the living masters of Arabic poetry. He lives in London.
Loading...
or
Not Currently Available for Direct Purchase