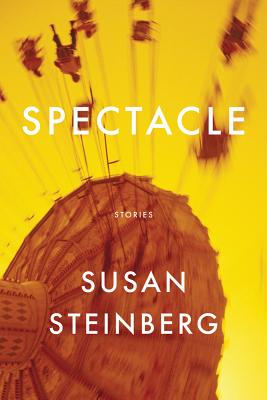 In these innovative linked stories, women confront loss and grief as they sift through the wreckage of their lives. In the title story, a woman struggles with the death of her friend in a plane crash. A daughter decides whether to take her father off life support in the Pushcart Prize-winning "Cowboys." And in "Underthings," when a man hits his girlfriend, she calls it an accident. Spectacle bears witness to alarming and strange incidents: carnival rides and plane crashes, affairs spied through keyholes and amateur porn, vandalism and petty theft. These wounded women stand at the edge of disaster and risk it all to speak their sharpest secrets.

In lean, acrobatic prose, Susan Steinberg subverts assumptions about narrative and challenges conventional gender roles. She delivers insight with a fierce lyric intensity in sentences shorn of excessive sentiment or unnecessary ornament. By fusing style and story, Steinberg amplifies the connections between themes and characters so that each devastating revelation echoes throughout the collection. A vital and turbulent book from a distinctive voice, Spectacle will break your heart, and then, before the last page is turned, will bind it up anew.

“In pithy, rhythmic sentences that sound like biting poetry, Steinberg's all-female narrators tell stories of loss, abandonment, failure to love, and failure to 'perform' in the ways the people in their lives expect them to.” —Page-Turner, the blog of The New Yorker, "Books to Watch Out For"

“[Steinberg] takes bold risks, exploring the boundaries of narrative and the possibilities of language and syntax. . . Steinberg's prose is rhythmic, hypnotic--teasing out confessions and revelations in stream-of-consciousness language. . . . Spectacle is a marvel.” —San Francisco Chronicle

“Readers of Lydia Davis and Anne Carson will welcome Steinberg's spare, innovative prose imbued with the cadence of verse. Rendered with formal originality, these hard-to-put-down stories explore the wounds that turn desire for love into performance art. This is a vulnerable book, gorgeously attending to grief, to lust, courageously bearing witness to all of life's deprave and human spectacles.” —Star Tribune (Minneapolis)

“Written with a sparse and grim tone, Steinberg's stories all have individual rhythms, and call to mind Lydia Davis trimming down Denis Johnson's Jesus' Son.” —Flavorwire, "The 10 Best Short Story Collections of 2013"

“What makes Susan Steinberg's story collection so refreshing is how concentrated the prose feels. Every sentence feels loaded, almost like a line of poetry.” —Complex, "The Best Books of 2013"

“[A] linked-story extravaganza. . . . [A] devastating cluster of uncompromising, funny, and eye-opening stories about women trapped in a male-centered world.” —Village Voice

“Both [Steinberg's] characters and [her] narratives store meaning in the spaces between the conventions, where the silence of a line break or an unspoken thought speaks volumes. At once vibrant and violent, Spectacle takes on unexpected territory and reveals it is all too familiar. . . . Deeply illuminating.” —Shelf Awareness for Readers

“Narrated entirely by women whose voices merge, divide, recur, and dissipate into one another, [Spectacle feels] novelistic in scope and ambition. Steinberg is a maestro of stylistic innovation, conducting orbits of narrative and motif, coaxing meaning and music from each line. . . . With its literary inventions and sharp storytelling, this is a masterpiece of contemporary short fiction.” —Publishers Weekly, starred review

Susan Steinberg is the author of the short-story collections Hydroplane and The End of Free Love. She was the 2010 United States Artists Ziporyn Fellow in Literature. Her stories have appeared in McSweeney’s, Conjunctions, The Gettysburg Review, American Short Fiction, Boulevard, and The Massachusetts Review, and she is the recipient of a Pushcart Prize. She has held residencies at the MacDowell Colony, the Vermont Studio Center, the Wurlitzer Foundation, the Blue Mountain Center, Yaddo, and New York University. She has a BFA in painting from the Maryland Institute College of Art and an MFA in English from the University of Massachusetts, Amherst. She teaches at the University of San Francisco.
Loading...
or
Not Currently Available for Direct Purchase