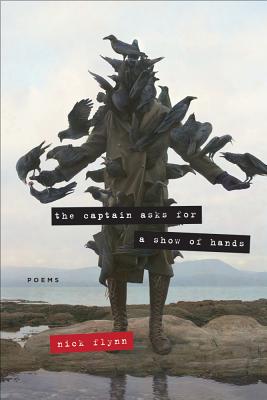 The Captain Asks for a Show of Hands

Now in paperback, the latest poetry by Nick Flynn, author of Another Bullshit Night in Suck City and The Ticking Is the Bomb

The Captain Asks for a Show of Hands begins as a meditation on love and the body but soon breaks down into a collage of voices culled from media reports, childhood memories, testimonies from Abu Ghraib detainees, passages from documentary films, overheard conversations, and scraps of poems and song, only to reassemble with a gathering sonic force. It's as if all the noise that fills our days were a storm, yet at the center is a quiet place, but to get there you must first pass through the storm, with eyes wide open, singing. Each poem becomes a hallucinatory, shifting experience, through jump cut, lyric persuasion, and deadpan utterance. This is an emotional, resilient response to some of the essential issues of our day by Nick Flynn, one of America's riskiest and most innovative writers.

"An unflinching attempt to use poetry to grapple with some of the most shameful monsters of this new century—the torture of detainees at Abu Ghraib and the terrible cost war enacts on everyone caught up in it, both civilians and soldiers." —The Rumpus


Praise For The Captain Asks for a Show of Hands: Poems…

“Each word is a lit match, a thrown stone, a howling blast, a choking torrent. Flynn has forged daringly intimate and clarion poems of conscience.” —Booklist

“[Flynn] sets for himself the task of discovering poetry appropriate to our time, an era of sanctioned torture and protracted wars . . . With The Captain Asks for a Show of Hands, Flynn faces some of the difficult questions and confusions of our time, and he challenges poetry to face itself, as well.” —The Houston Chronicle